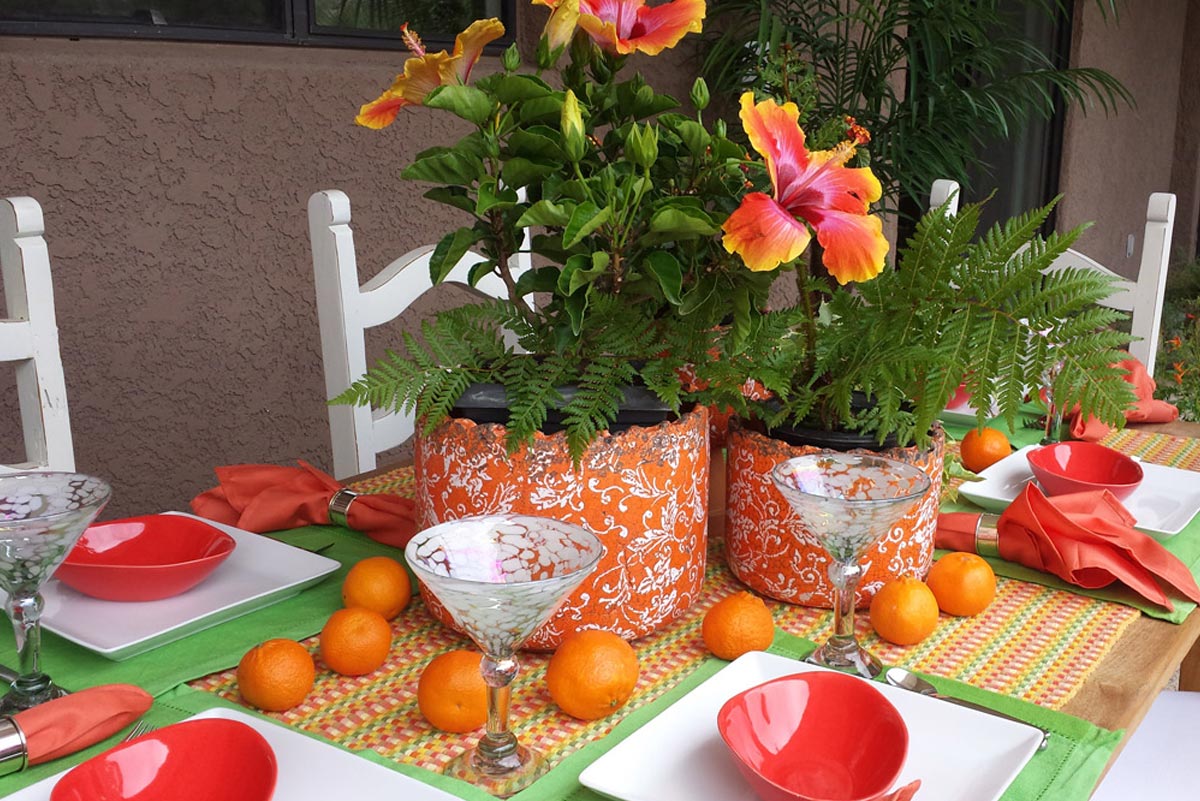 Playing off the brilliant reds and oranges in a grouping of potted flowers, Patti Harrell Hoech of Patrician Design combined solid-color and patterned serveware and linens in a citrusy, summery tablescape. Photograph by Courtesy Patrician Design. 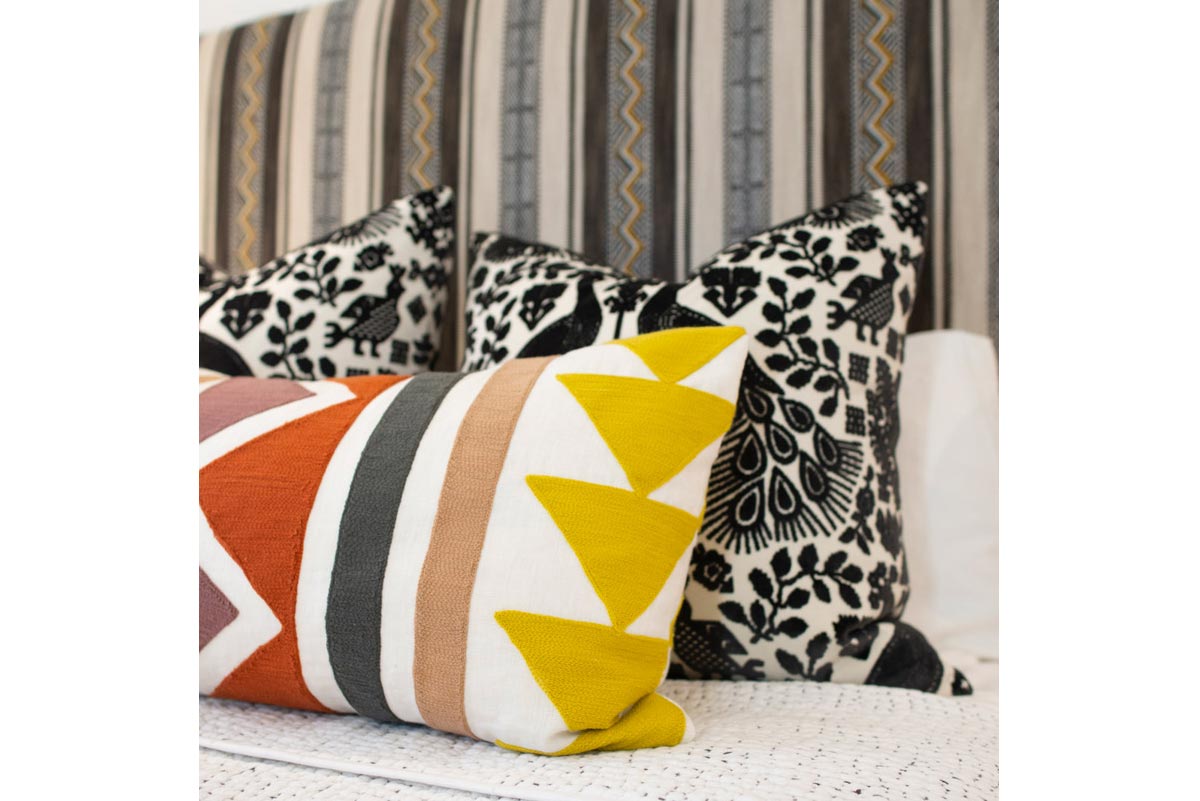 Stripes, bird prints, and a Native American–inspired design? Sure, why not! A neutral white bed covering makes it possible for a grouping of entirely different types of patterns to work together. Notice how French & French Interiors placed the black and white pillows between the two more colorful patterns? Photograph by Danny Allegretti. 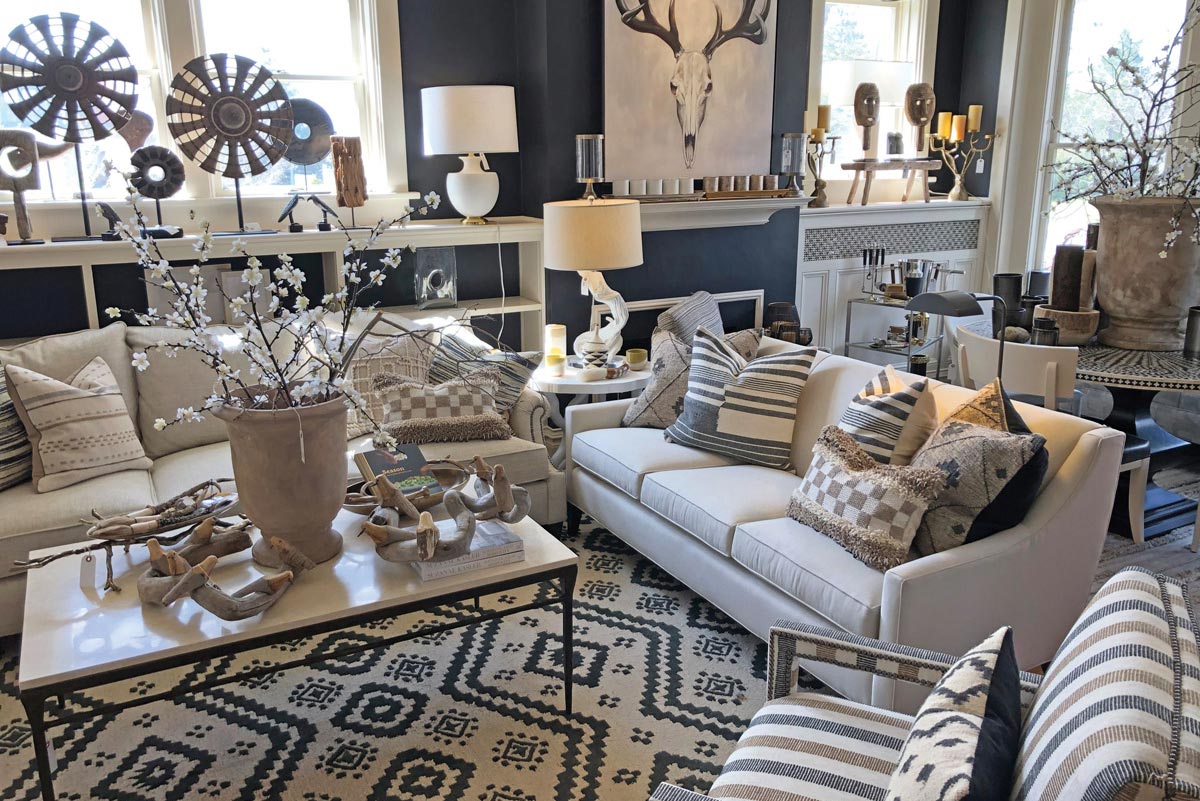 Revolving around a base of creams in the sofas and coffee table top, a selection of patterns in blacks and whites, grays, and taupes carefully chosen by Reside Home never gets out of hand. Photograph by Jeff Fenton. 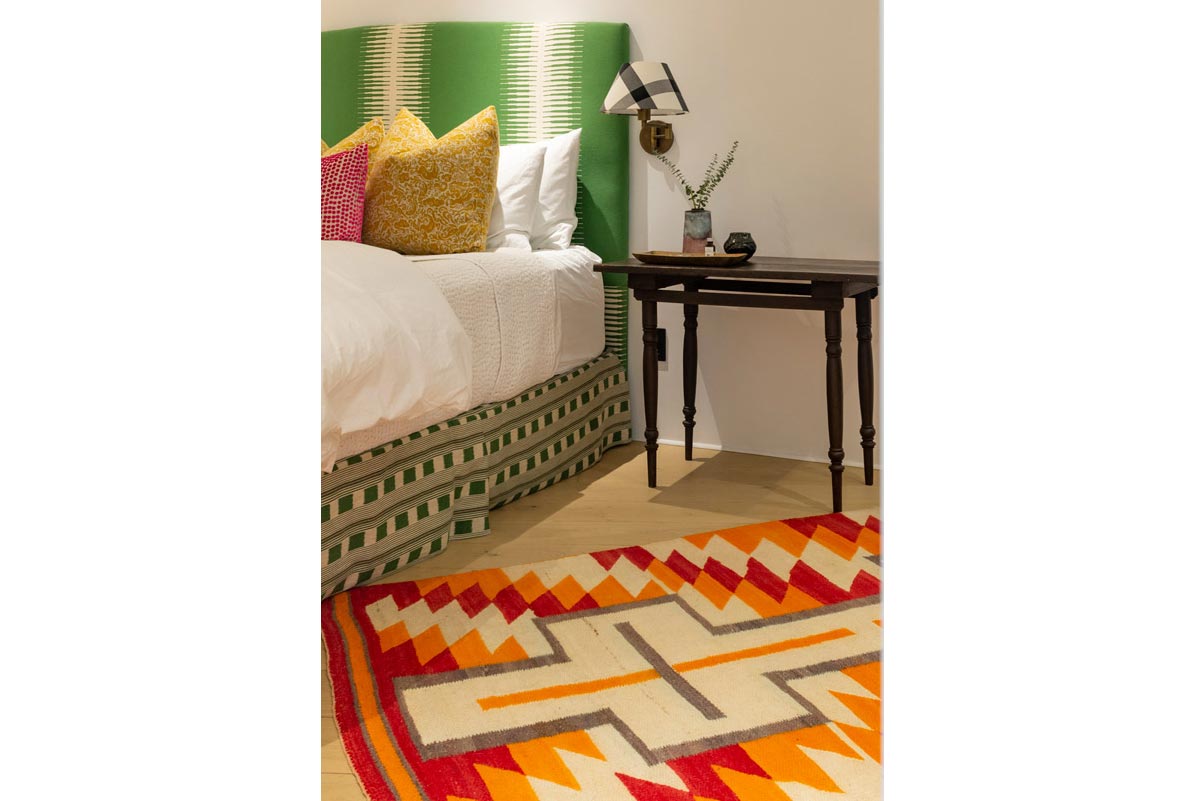 A bedroom by French & French Interiors combines patterns in multiple designs and colors, in increasingly larger scale from those in the accent pillows to the Southwest-style rug. Photograph by Danny Allegretti,

Go ahead and mix and match—the layered looks is in

Pattern is one of the most evocative of design tools with the power to completely transform a room. Minimal, bohemian, traditional, and modern, patterns infuse interest into the art of interior design. When layered on upholstery, curtains, floors, or walls, patterns can create a calming or stimulating effect, depending on how they are used. From stripes, florals, animal prints, argyles, and chevrons, to damasks, paisleys, gingham, and herringbone, through juxtaposition, repetition, and continuity, patterns mold shape into intelligible form. A mix of layered patterns can even trigger new ways of thinking when incorporated into a strong interior design scheme.

“It’s fun to provoke a tiny bit of thought,” says Patti Harrell Hoech, owner of Patrician Design (patriciandesign.com) in Albuquerque. “I like mixing patterns that are dissimilar, or introducing patterns that are unexpected. But you don’t want design patterns so edgy or disturbing that it’s a mental challenge or a disruption.”

“You don’t want design patterns so edgy or disturbing that it’s a mental challenge or a disruption.” —Patti Harrell Hoeck

“There’s definitely a point where too much pattern is too much pattern, and it moves from choreographed chaos into uncomfortable chaos,” agrees Jeff Fenton, co-owner of Reside Home (howyoureside.com) in Santa Fe. However, he says, people usually make the opposite mistake. “I find the biggest challenge people face when using patterns is not going far enough, not committing to the end goal.” They may be comfortable with one or two patterns, but when it comes to three or four, Fenton says, “they become paralyzed and retreat rather than moving forward. A designer can help them move through that.”

It takes real skill to make layered patterns work; there are tricks of the trade. Take the matter of scale. “Scaling is what makes layered patterns compatible,” says Heather French, co-owner of French & French Interiors (frenchandfrenchinteriors.com) in Santa Fe. “If you have different patterns of the same scale things get chaotic. We start with a small-scale pattern, bump up the next layer, then bump up the size again. This scaling up or down is what allows the eye to flow.”

Then there’s the important matter of repetition. As in a musical composition where certain parts are replayed, “Repetition of pattern shows commitment to pattern,” Fenton explains. “If you have five different patterns repeated only once, it doesn’t reinforce the message. You need to repeat it two or three times,”—maybe on a chair, a rug, a pillow. “That way the mind can connect various patterns around the room, which is important to creating fluidity.” Continuity of elements like color used within disparate patterns also creates fluidity, helping the brain connect the dots. The human mind not only receives information, but interprets and patterns it.

“I find the biggest challenge people face when using patterns is not going far enough, not committing to the end goal.”—Jeff Fenton

Patterns can also transport people to another place and time. They can be both beautiful and rich in history and culture, especially around New Mexico where Native Americans created shapes and geometric designs which became representative symbols transcending tribal language barriers. “There are a lot of benefits to living in this area, a ton of patterns to explore due to the Native American culture, which uses pattern really well,” says French. It is evident in Native American silver, rugs, and pottery. Now these patterns have made their way into interior design schemes worldwide.

“Southwest-inspired prints and patterns are trending strong across the U.S. and internationally,” says Fenton, noting that home design brand Kravet has an entire fabric line of New Mexico–inspired patterns. Today, these patterns are just as likely to pop up on a pillow in a loft in Manhattan or a flat in Paris as in a casita in Abiquiú.

Pattern can lend itself to almost medium given the right application, offering creative interior designers the chance to showcase their talents. Hoech takes scraps of tile and breaks them apart to create a mosaic out of random shards. Fenton takes design cues from what he sees as “patterns already happening in a room,” while French may start with “a keystone fabric and jump off from there,” applying pattern to objects “according to the direction of the project.”

Carefully considered and artfully applied, pattern elevates and transforms spaces from bedrooms to kitchens. Consult an interior designer to learn how to use pattern to add depth, dimension, and all kinds of ambience.

Know the Lingo. Although pattern can add texture to a space, the two words have different definitions. Texture refers to the two-dimensional quality of a surface, whereas pattern relates to illustrative perception achieved by repeating a graphic motif.