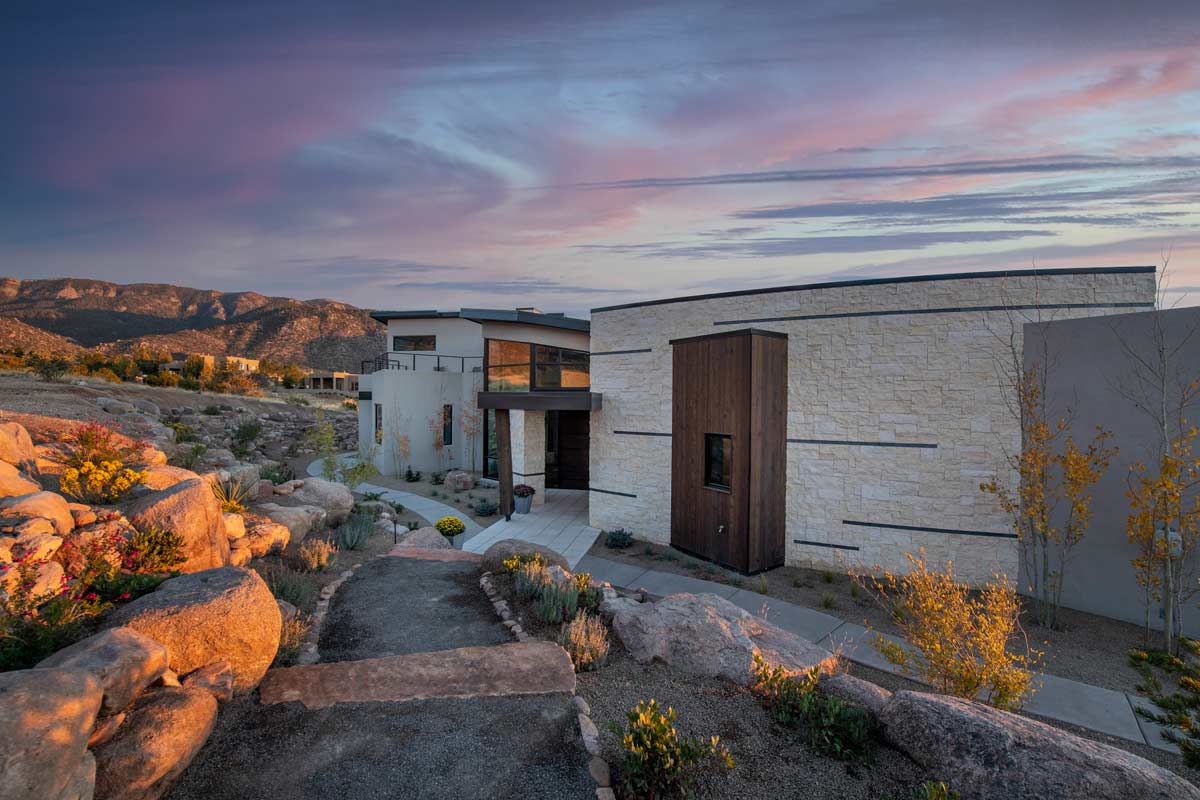 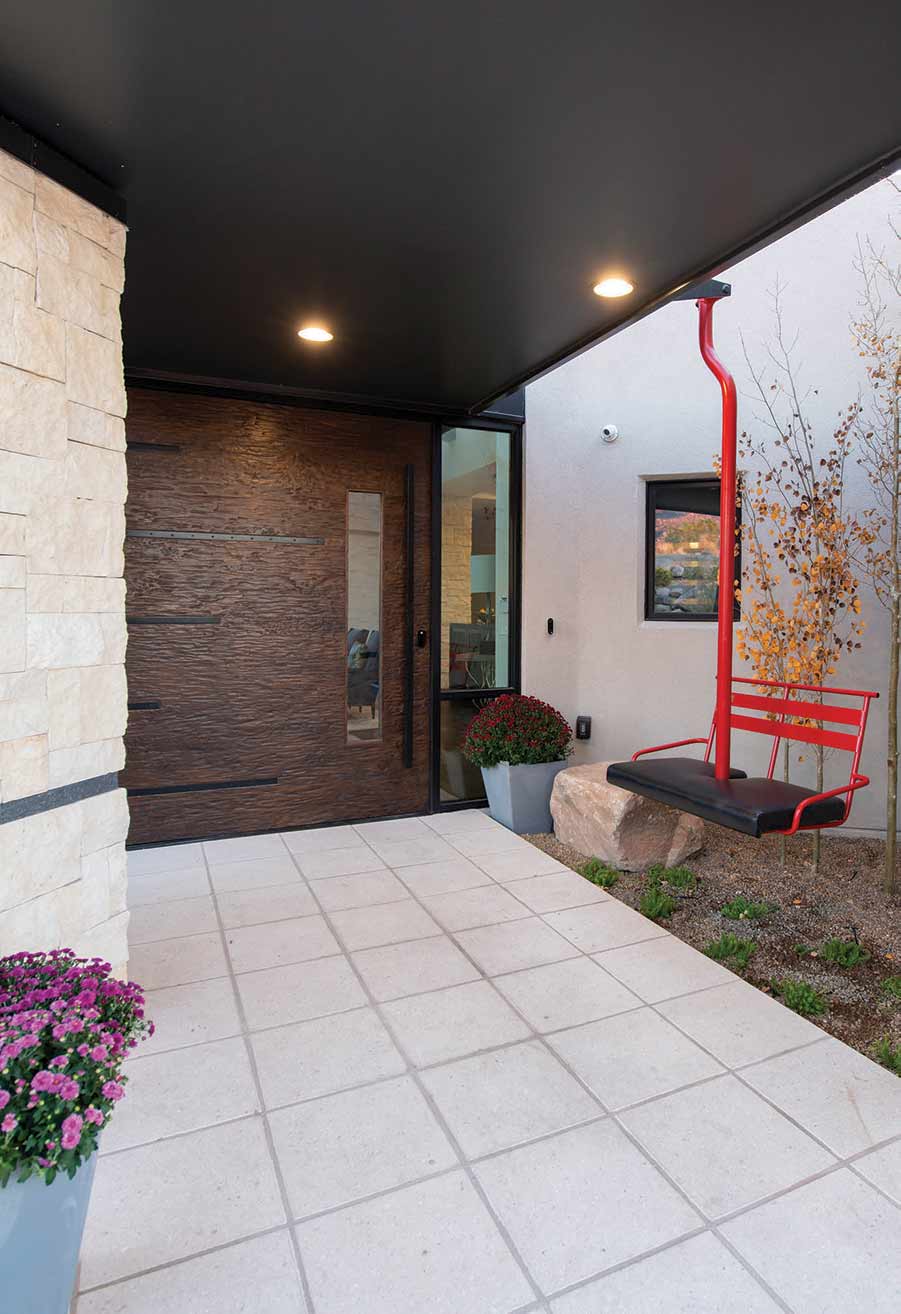 A ski lift chair purchased from their favorite resort in Red River welcomes guests to the Sersun’s custom home. 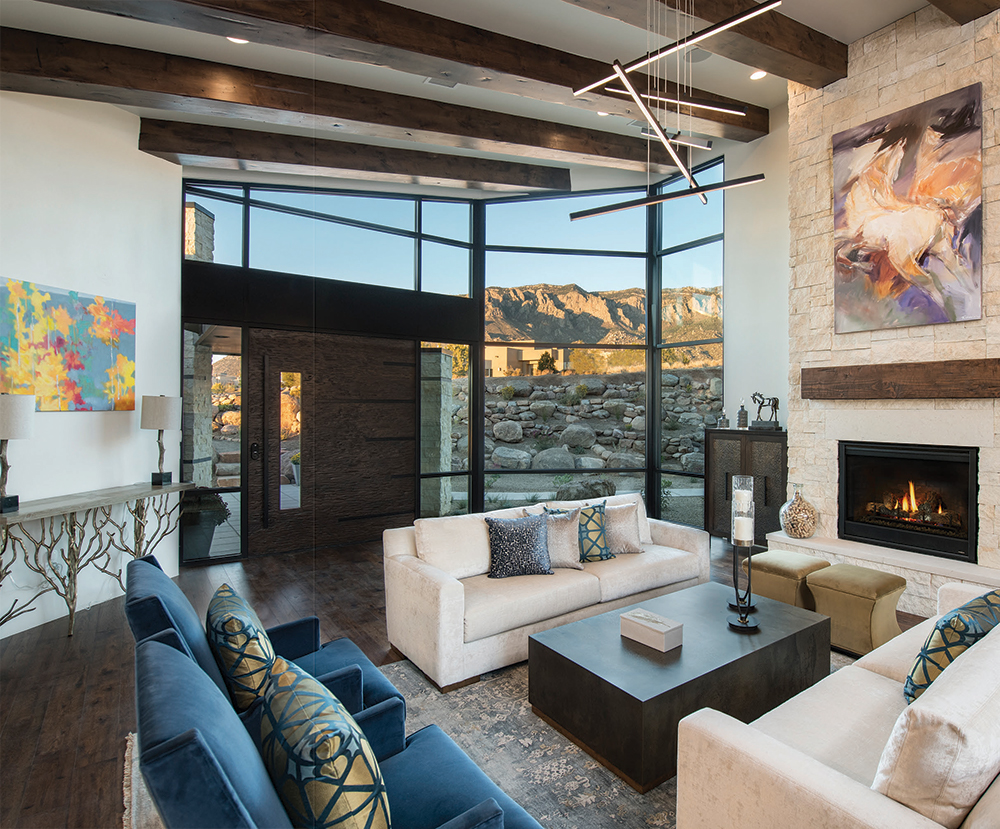 Ken was intent on incorporating Texas limestone, both inside and out. “We originally thought it wouldn’t work, but Diego made it happen,” Suzanne says. The 16-foot storefront-style glass wall affords stunning mountain views—one of the main reasons Ken and Suzanne chose their lot. 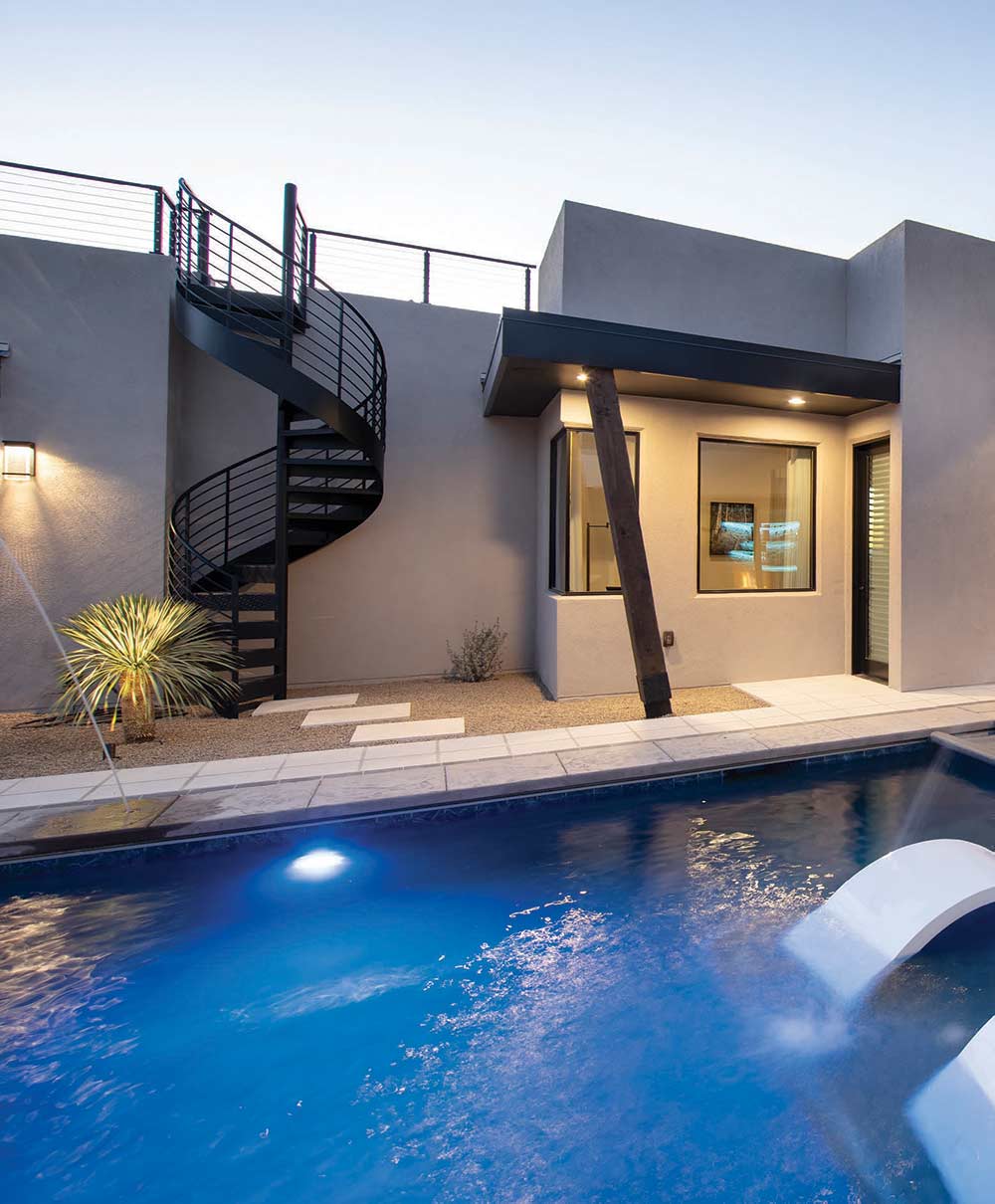 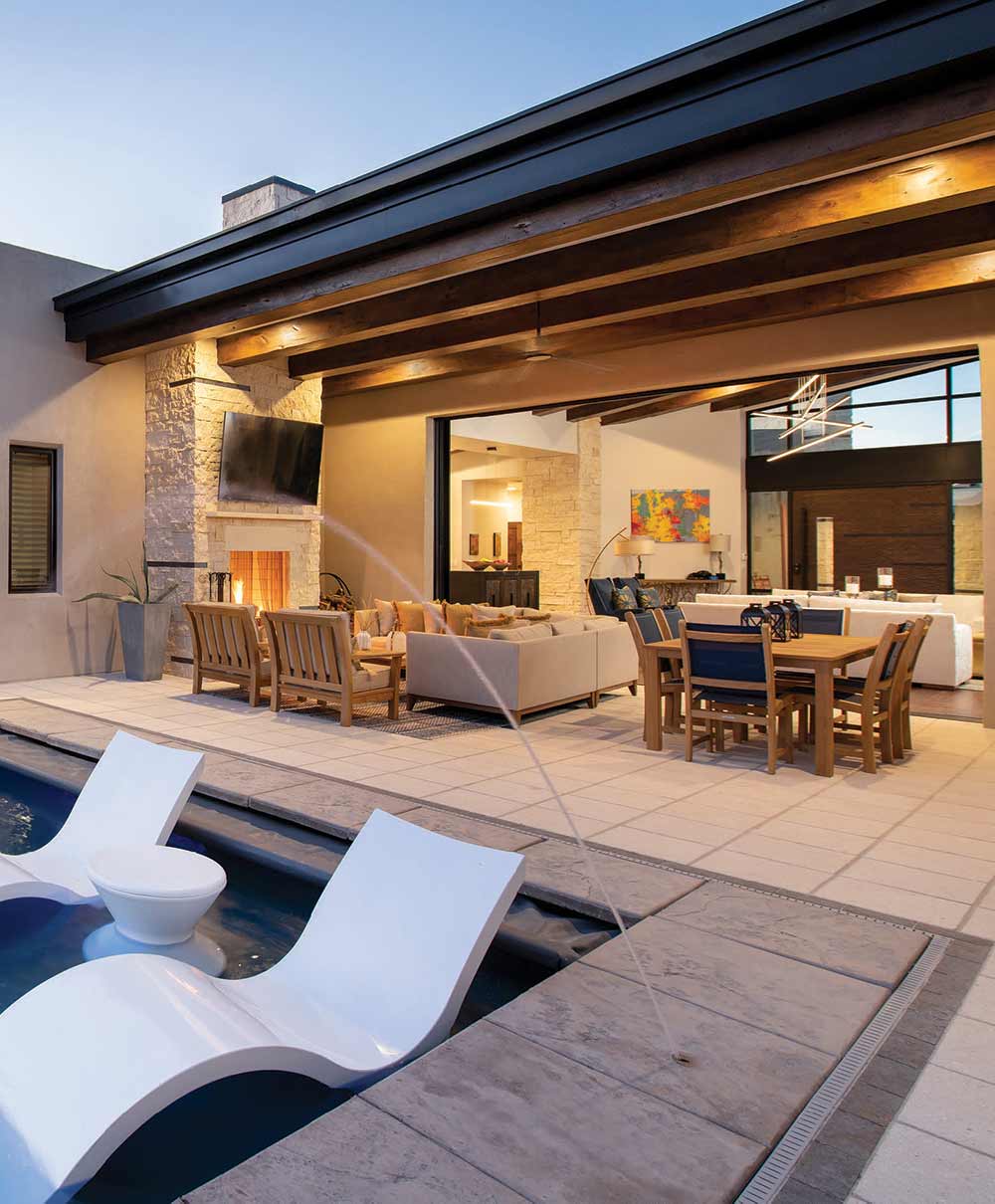 In the back of the house, 20-foot glass pocket doors slide open between the great room and the outdoor living area, with the pool beyond. Up the spiral staircase is a rooftop deck where Ken and Suzanne enjoy their morning coffee and their 360-degree views of the Sandias. 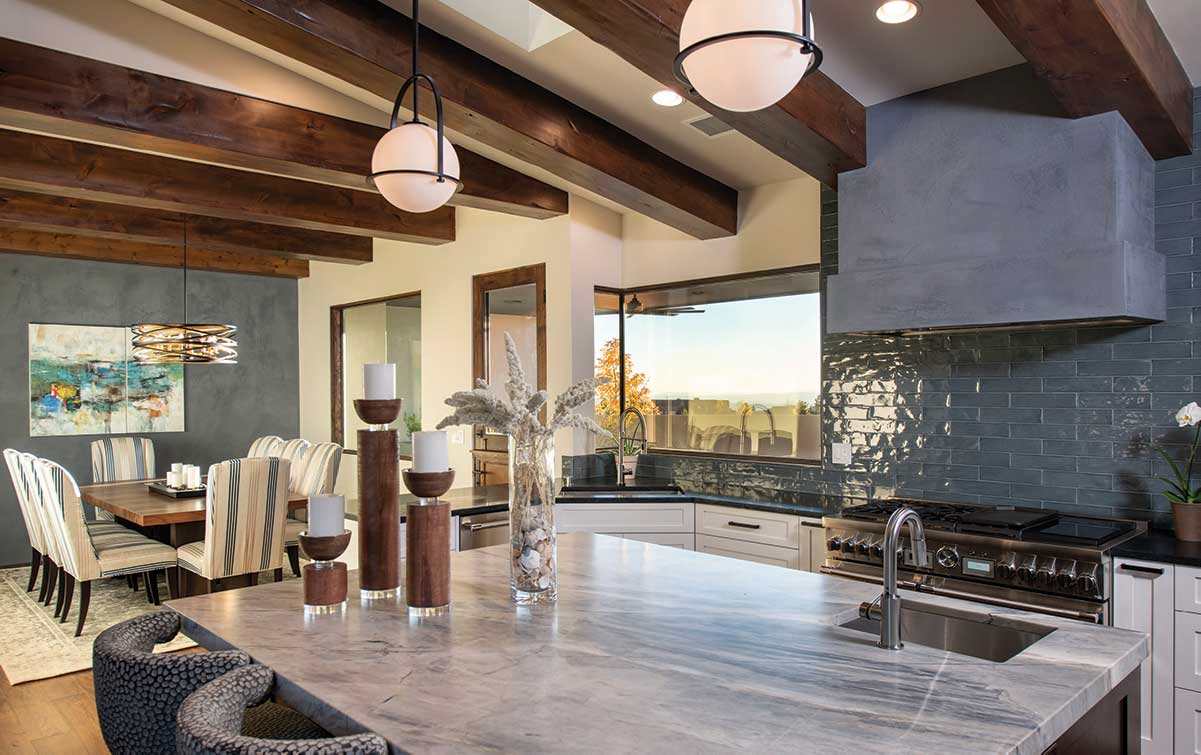 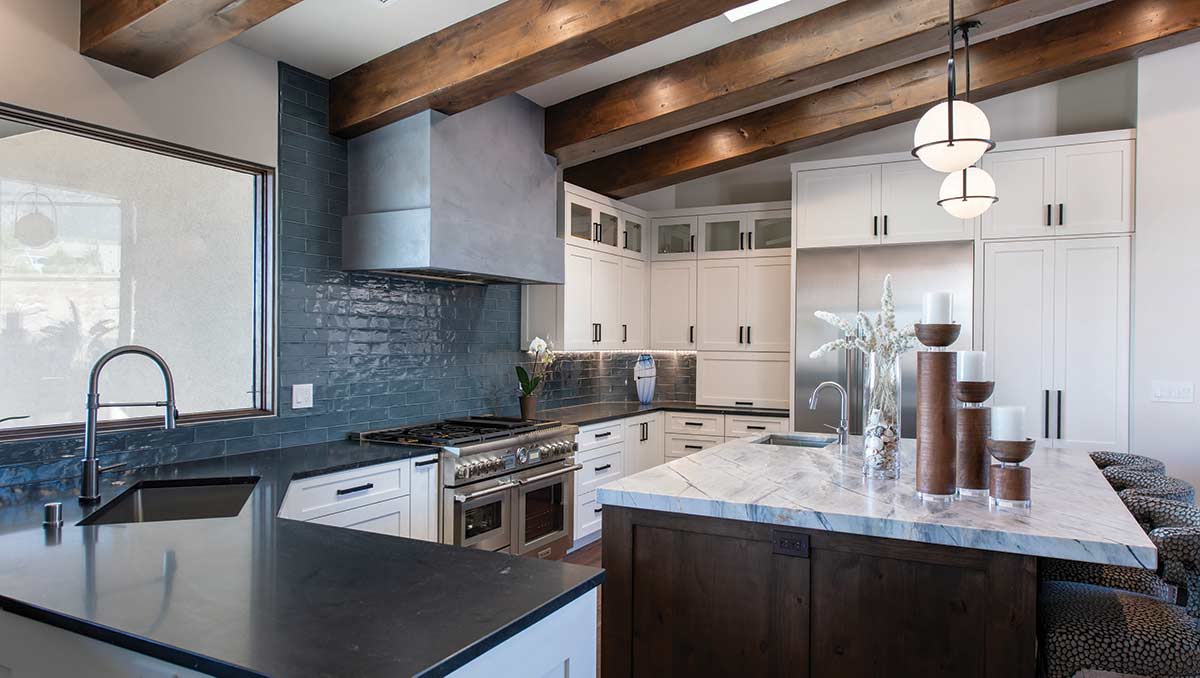 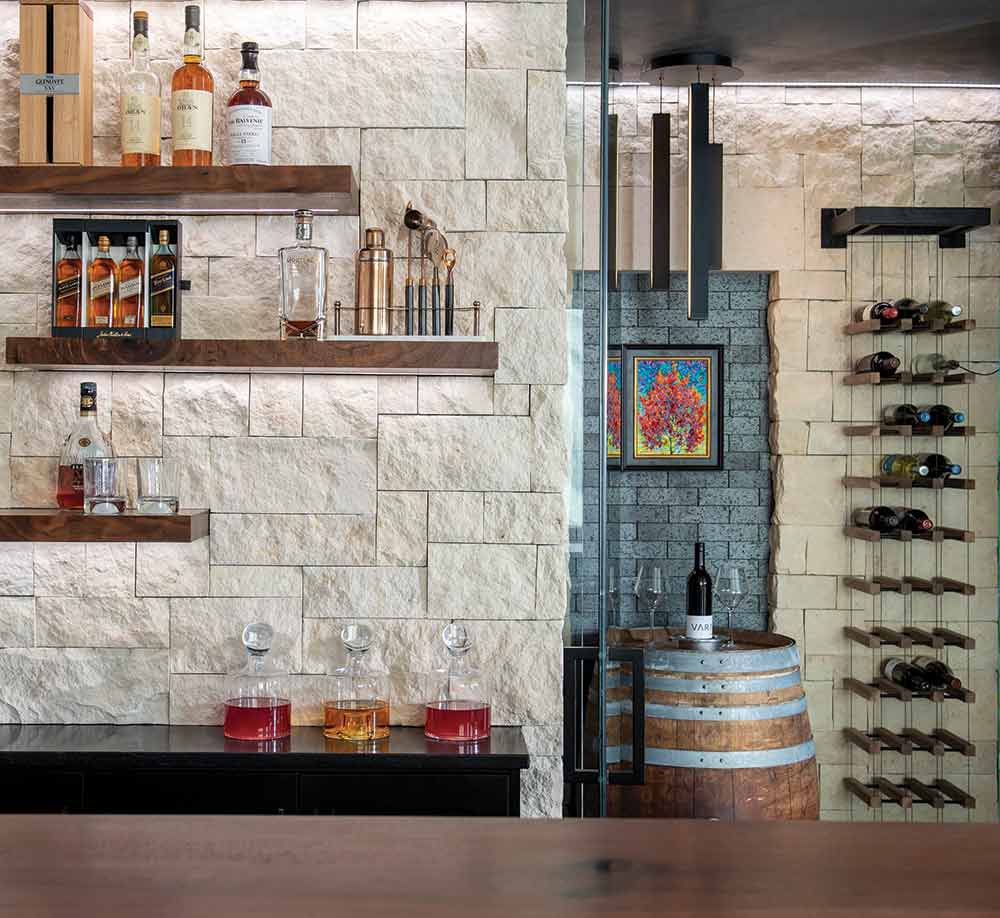 After nearly three decades traveling around the world as an Air Force family, Ken and Suzanne Sersun could have chosen anywhere to retire, but New Mexico had captured their hearts decades ago. So, they headed straight here.

Ken first fell in love with the Land of Enchantment in 1993, while stationed at Kirtland Air Force Base. He spent his free time skiing at Red River, eventually purchasing a townhome there. After being transferred to the Pentagon, he met Suzanne, and then brought her to Red River on their honeymoon in 1997. “We both loved it,” Ken says, adding that Suzanne had a bit of a head start, having lived in the area as a teenager.

So, when it was time to settle down after all those years of living in just about every corner of the world, Albuquerque was a no-brainer. Choosing a lot in the High Desert neighborhood was a given, too: “There are some building restrictions here,” explains Suzanne, “but we wanted the views of the Sandias and the hiking trails.”

Finding Common Ground
Ken and Suzanne purchased their lot in 2017. Although they totally agreed on the musthave features for their custom home—having gathered inspiration from all their previous homes—they had drastically different opinions about the home’s design style.

“Ken’s vision sounded like a rustic log cabin, while Suzanne’s vision was sleek and modern,” says Diego Ruiz of Diego Handcrafted Homes, the award-winning designer and builder the couple chose after meeting him at the Parade of Homes. “We ended up with ‘midcentury mountain modern,’ but we all refer to it as ‘Bass Pro Shops meets Nordstrom,’” he quips.

I’m a triathlete, and I wanted a forty-foot lap pool. It didn’t
really fit the design at first, but Diego made it work.
–Ken Sersun

The couple is thrilled with how Ruiz was able to accommodate both of their visions as well as incorporating their desired features. Suzanne’s dream kitchen is based on a photo she clipped as inspiration years ago. “It’s the same colors and vibe and shape, and I’ve always wanted a [service] pantry,” she says, adding that she even scored built-in spice racks on either side of the stove. “I’ve wanted those forever.”

As for Ken, he says his four-car garage is the one he’s always envisioned, complete with what he calls his “OCD storage system.” He loves hanging out in his rec room, built for entertaining with a fully stocked bar, a glass wine cellar and a pool table. Out back is another of Ken’s faves: “I’m a triathlete, and I wanted a forty-foot lap pool,” he says. “It didn’t really fit the design at first, but Diego made it work.”

The casita, which includes a guest suite that sleeps six, a kitchenette and a sauna, also has a multipurpose room that Suzanne uses for yoga and Ken uses for business meetings. “I guess I wasn’t ready for retirement after all,” he laughs, “so I bought a Chick-fil-A franchise.”

Overcoming Obstacles
Start to finish, the project took about three years, and it wasn’t without its challenges.

“Ken and Suzanne wanted a two-story home with the office upstairs, to be able to fully capture the 360-degree views,” says Ruiz. But a steep lot, height restrictions and a natural arroyo stood in the way of their dream.

So, Ruiz revised his design, carving into the side of the hill and dropping the house 9 feet below the top of the lot grade. “We were worried that it was going to block the view of the mountains,” he explains, “but it blocked the view of a neighboring house instead. It was a very happy surprise.”

Landscape designer Luke Resnick of Agua Dulce Earthscapes then terraced the slope in front of the house and covered it with rocks. “Now, it looks like it’s flowing right up into the mountains,” says Ken. “It adds privacy, but it’s also gorgeous.”

Making It Personal
Thinking back to Red River, Ken says that spending time there over the years certainly influenced the design of this house. “Red River has been the only sense of consistency we’ve had throughout our military career,” Ken says. “We would return nearly every year to visit, and it provided a sense of stability; it’s the place our son knows best as his home.”

So, when Red River Ski Area replaced their original red double chairlifts with quads, Ken and Suzanne purchased chair #99 as a reminder of their happy times there. Although they originally wanted to hang it up out back, out of sight, Ruiz had other ideas.

“Diego said: ‘No, it’s okay to have some whimsy,’” Suzanne says. “He turned it into a swing and mounted it right out front.”

“It’s pretty special to us, and we’re glad we listened to him,” Ken adds. “It’s part of our history.”

a diamond in the rough