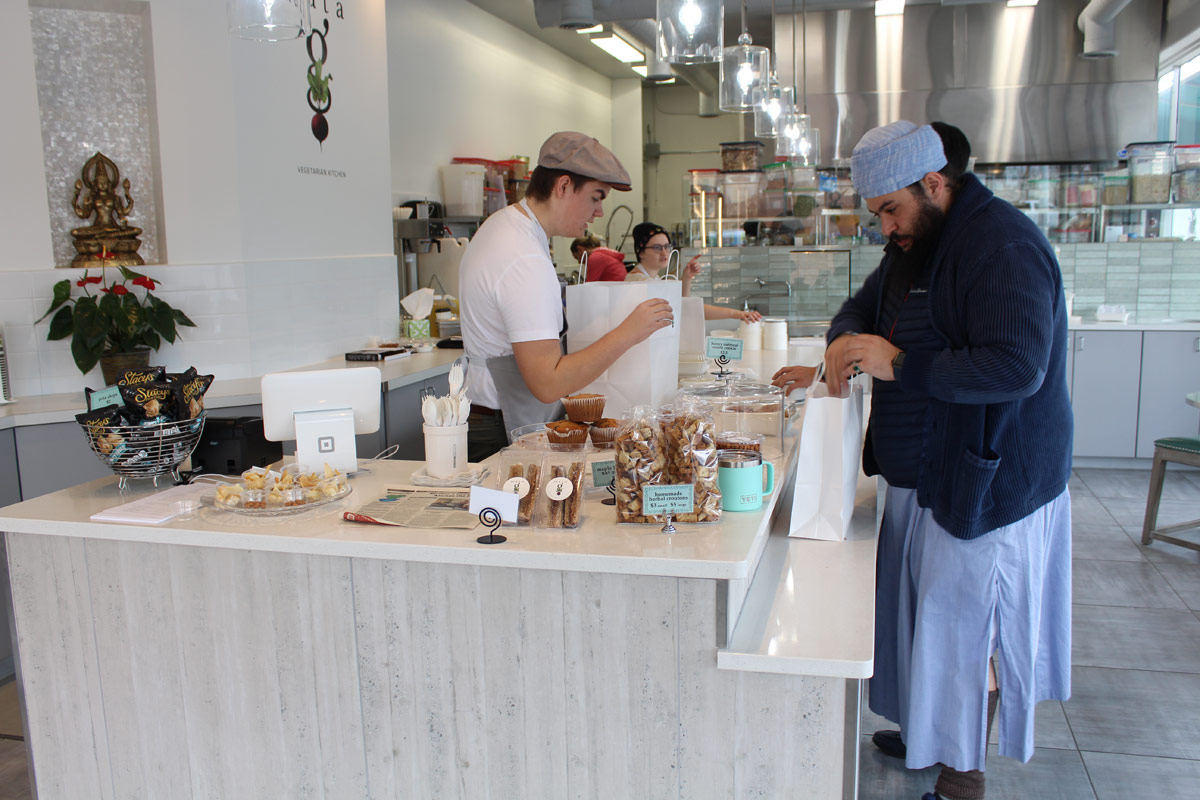 It’s strictly counter service at Mata G, but there are a few tables if you prefer to enjoy your breakfast or lunch in-house. 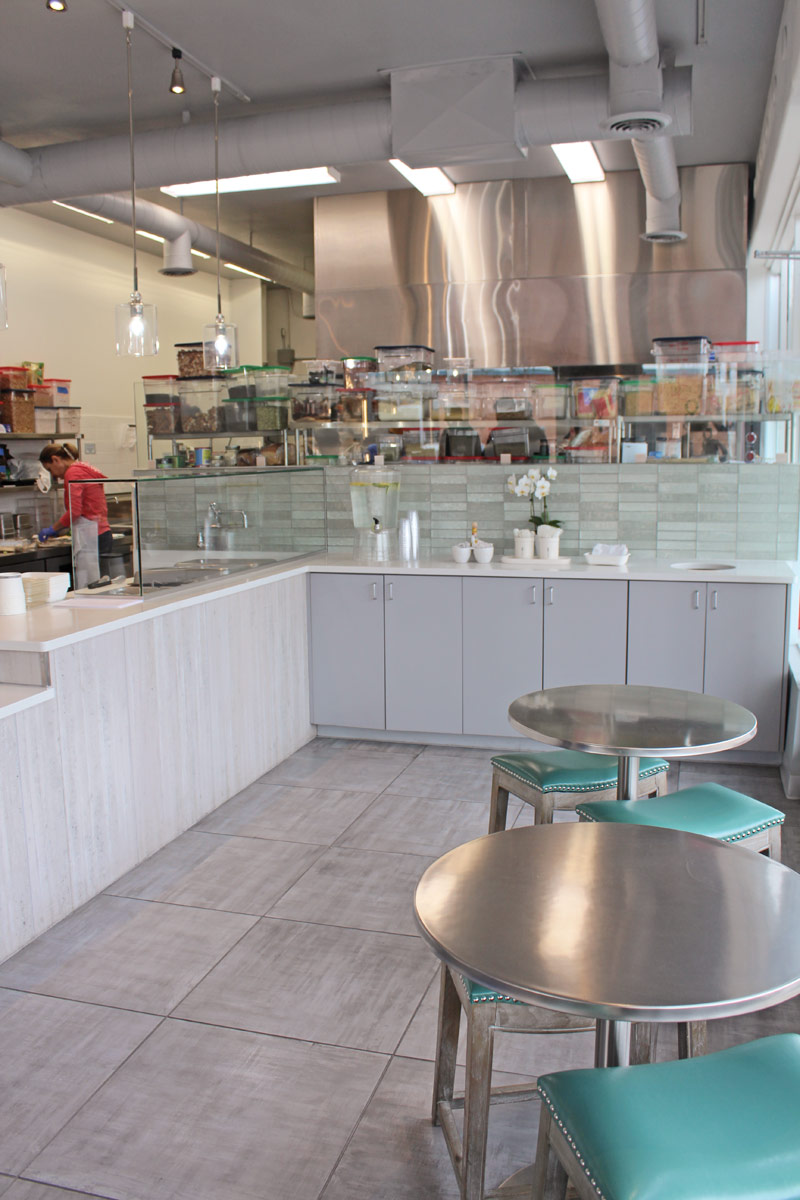 With a corner location at Amherst and Silver in Nob Hill, it’s easy to drop into Mata G Vegetarian Kitchen for a grab and go meal. 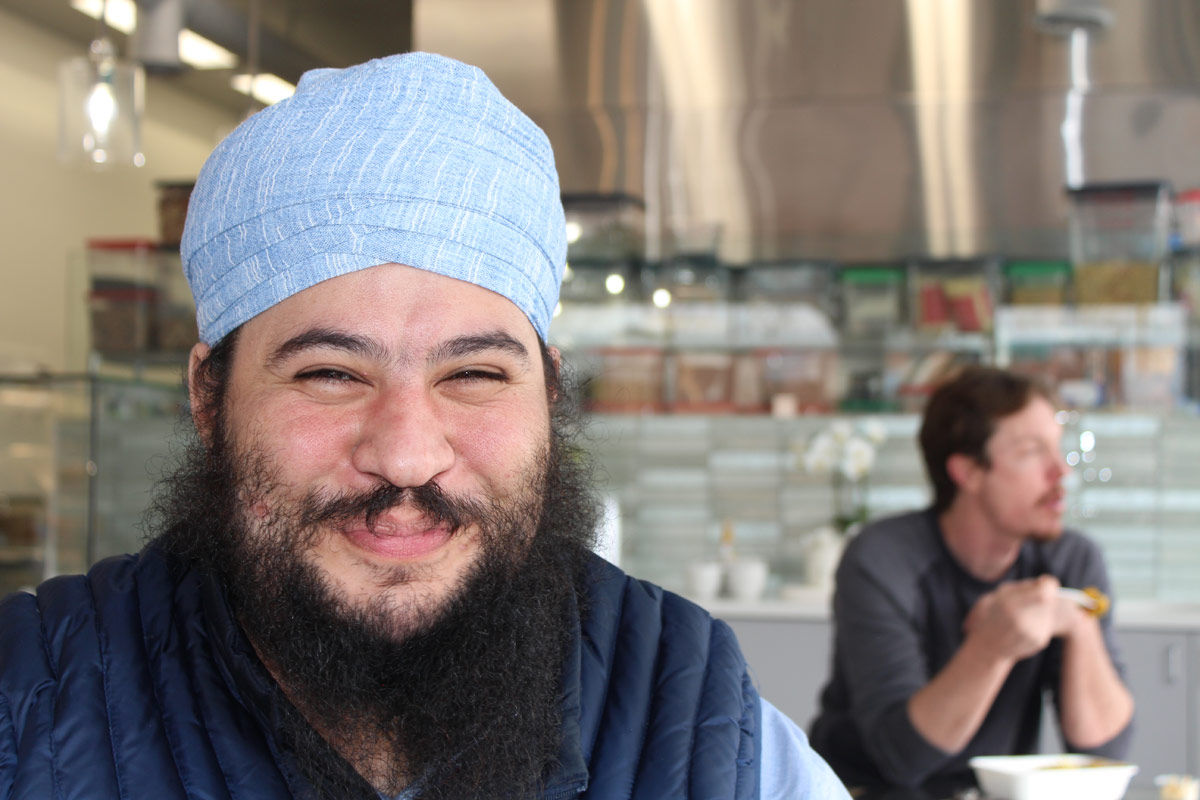 Though his mother, Gurubachan Kaur Khalsa, is the owner of Mata G, Hari Mander Jot Singh Khalsa (left) is one of the restaurant’s—and the head chef’s—biggest fans. “I’m there nearly every day,” he confesses. 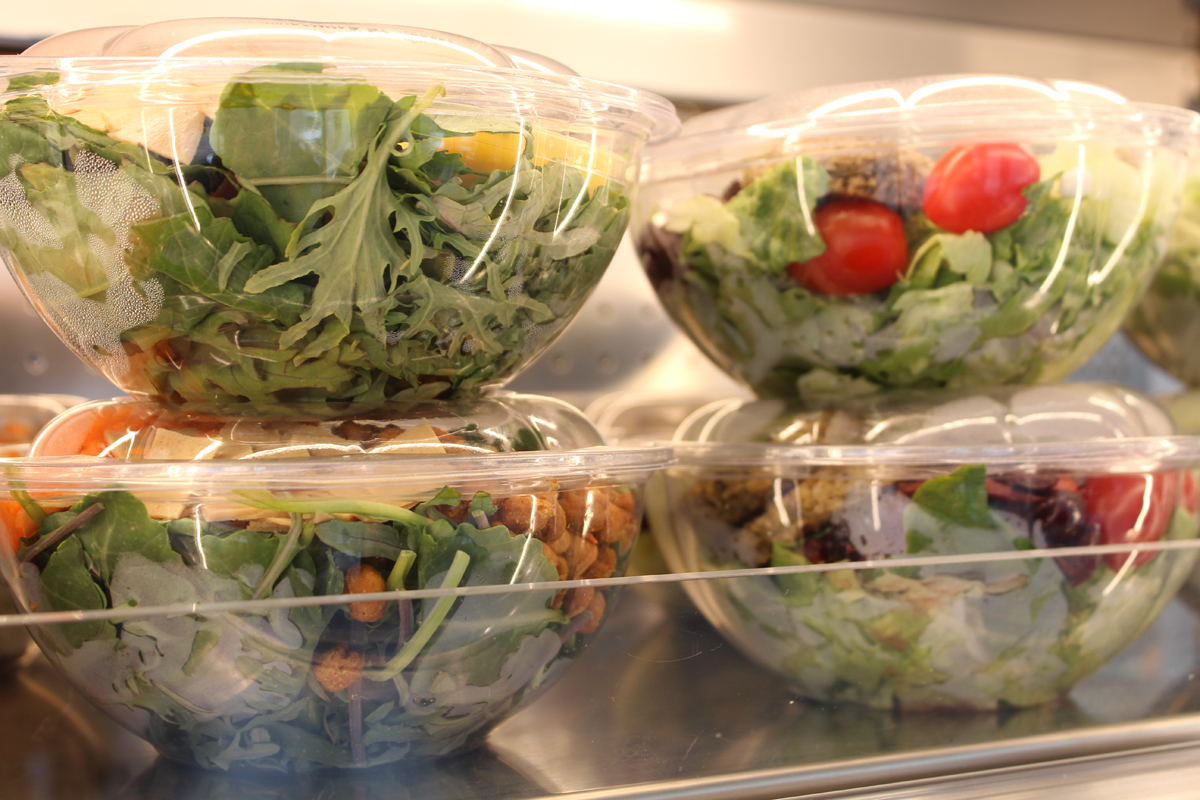 From the refrigerated case, pre-packaged salads, including the Lebanese salad with romaine, kalamata olives, kibi cakes, and tahini dressing, are generously portioned. 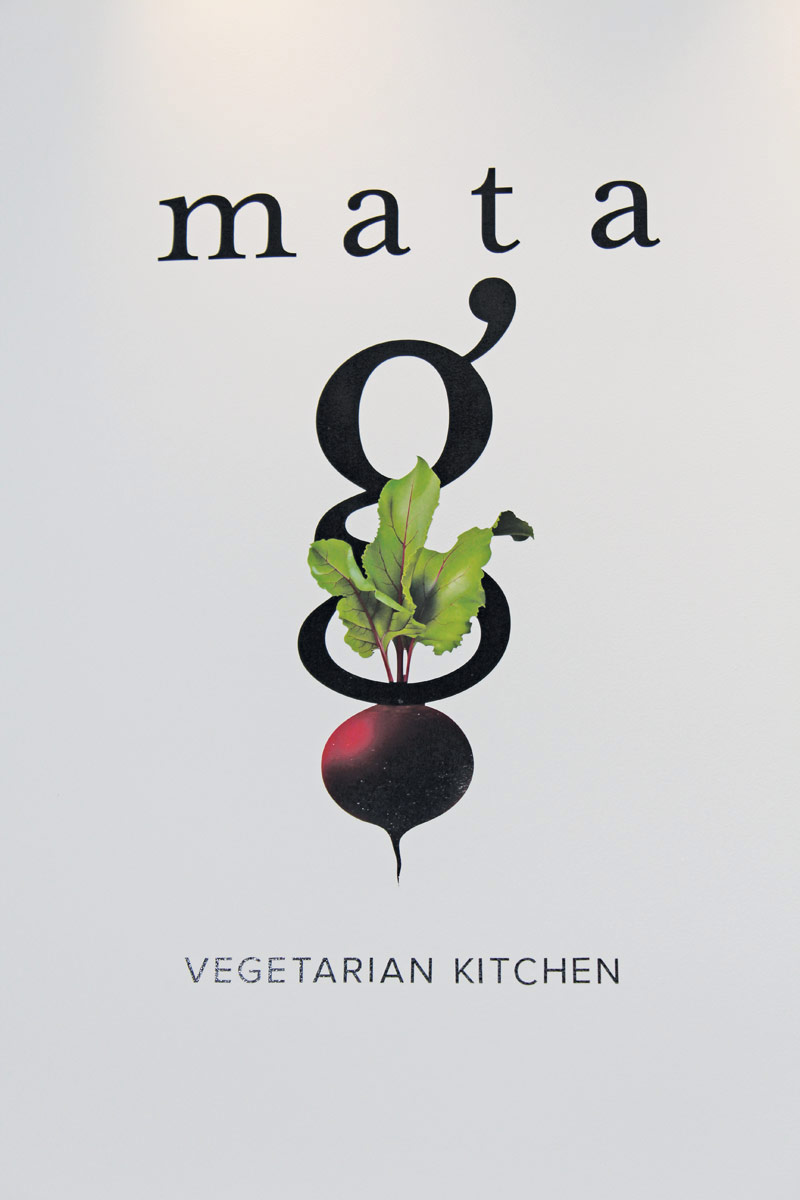 Though the name says “vegetarian,” about 50 percent of the dishes served at Mata G are actually vegan, and many are gluten-free. 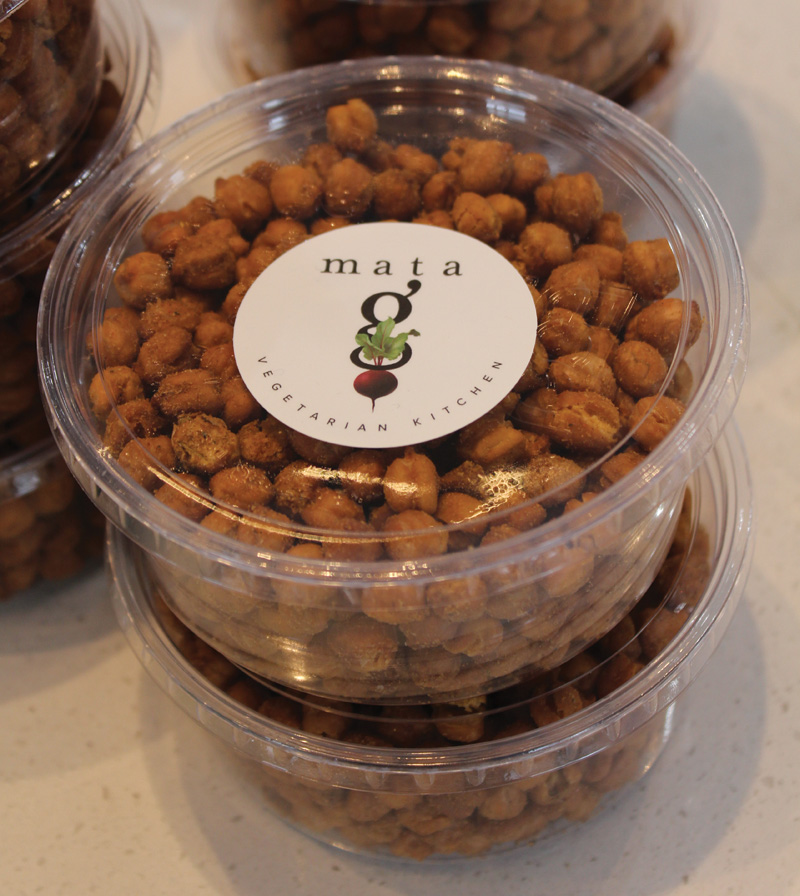 Seasoned chickpeas are a tasty snack to enjoy at one’s desk.

Story and photographs by Amy Gross

Maybe it’s the scents of turmeric, coriander, and cinnamon that hit your nose when you walk through the door, or perhaps it’s the friendly smile from the server behind the counter. Either way, Mata G Vegetarian Kitchen has hit upon a surefire formula for restaurant success: fill your place with genuine warmth of spirit, pair it with time-tested family recipes made fresh every day, and make it easy for customers to make quick, healthy choices and get back to their busy lives.

Owner Gurubachan Kaur Khalsa has been feeding people for much of her life—including her own family, says Hari Mander Jot Singh Khalsa, one of Gurubachan’s three children and my culinary guide for the day. Hari and his brother, who own and operate Sukhmani Home and Sukhmani Nob Hill Jewelry next door, call themselves her biggest fans. “The food Mama makes in the restaurant is the food she makes at home,” he explains. “It’s the food I grew up eating.”

“The food Mama makes in the restaurant is the food she makes at home. It’s the food I grew up eating.”—Hari Mander Jot Singh Khalsa

Back in the early ’70s Hari’s parents opened one of the first vegetarian restaurants in Boston. They toyed with the idea of opening a vegetarian restaurant here in New Mexico, but having done it once before, Gurubachan was not interested in being stuck in the kitchen all day; she wanted to be meeting people and connecting with her customers. As a grab and go establishment, Mata G (Sanskrit for “Sacred Mother”) showcases Gurubachan’s own recipes (as well as those of her mother and grandmother) and puts her out in the front of the house where she can chat and laugh with guests and get instant feedback on her dishes.

The day I visit Mata G in its sleek, tiled Nob Hill location at the corner of Amherst and Silver, the weather is uncharacteristically (for New Mexico) gray and dreary. A big container of yogi tea—a proprietary blend of cinnamon, clove, cardamom, ginger, honey, and milk—is soul-warming and restorative as I peruse the large refrigerator cases filled with pre-packaged vegetarian and vegan soups, burritos, salads, sandwiches, hummus, and other sides. Gurubachan’s delicious tofu salad has apparently changed the tune of many a non-tofu fan; after sampling it, I count myself among the converted. Some items are designed for munching at a desk; others are ideal for heating up at home after a long day.

It’s a Thursday, which means the daily hot cuisine is Indian. Each day of the week offers a different international cuisine, such as Moroccan, Lebanese, and Mexican. The popular Mata G Sunday brunch consists of “whatever Mama feels like cooking,” says Hari with a smile. Every day there’s a daal on offer, a rice, a burrito, a soup, a sautéed veggie, and usually tofu in some form. I sample the mung daal, in the form of khichdi—an Indian comfort food that proves to be just the antidote for the gloomy weather. The curried vegetables are cooked and seasoned perfectly, and the potato shells stuffed with turmeric- and spice-infused mashed spuds and topped with a fluffy cheese are positively decadent.

A steady stream of customers passes through as Hari marvels at how well the restaurant is doing considering it’s still in its soft opening stage. “One customer drives across town every Wednesday (Italian day) for Mama’s spinach supreme [a pasta dish with spinach, cream, green chile, and cheese] and beet parmesan [which swaps the traditional eggplant for shredded beets],” he says. “The response has been phenomenal.”

When you go: Be sure to sample the daily hot dishes (and say hello to Gurubachan). Grab a container of soup from the refrigerator case for dinner, and some yogi tea for the road.