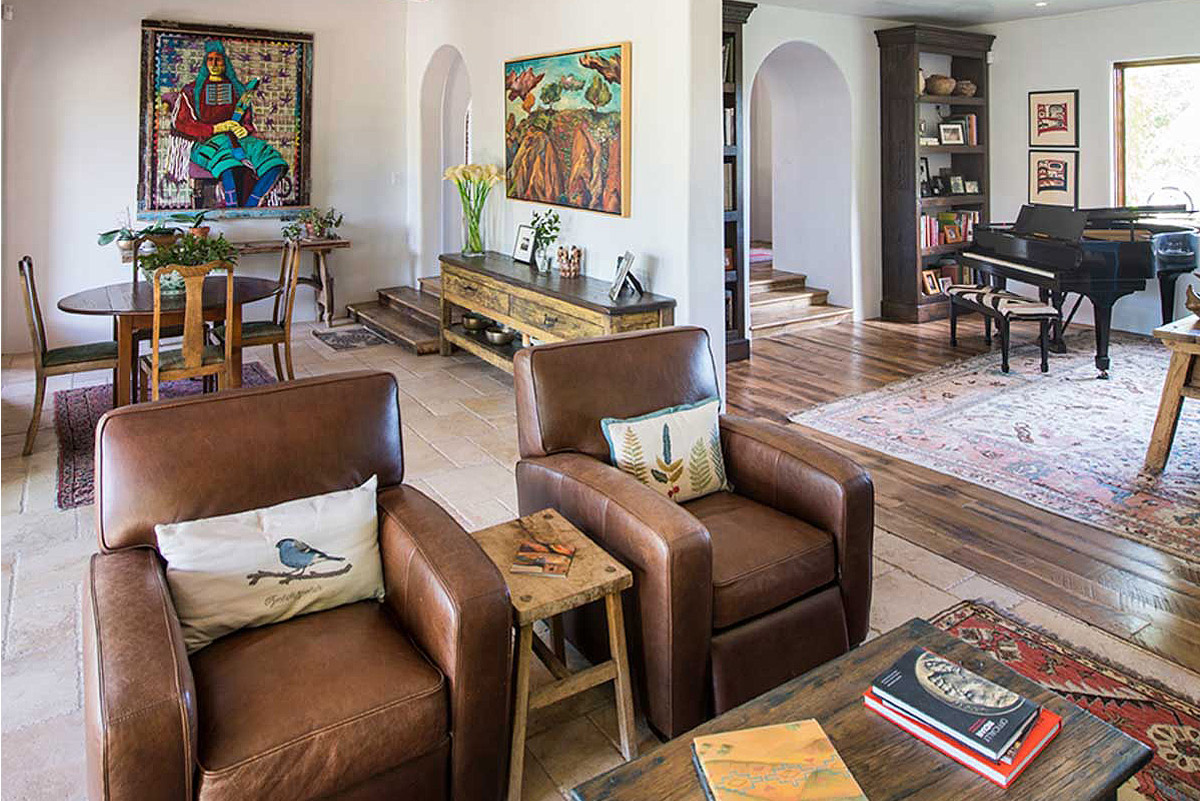 Busy working parents plus two teenagers equals a lot of daily activity. Scott and Melissa Coleman’s home in Santa Fe was designed—or redesigned—to be a comfortable, quiet respite from the hustle and bustle. The kids’ TV and game room (foreground), the sun room (at rear), and the formal living room (at right) easily flow into one another. 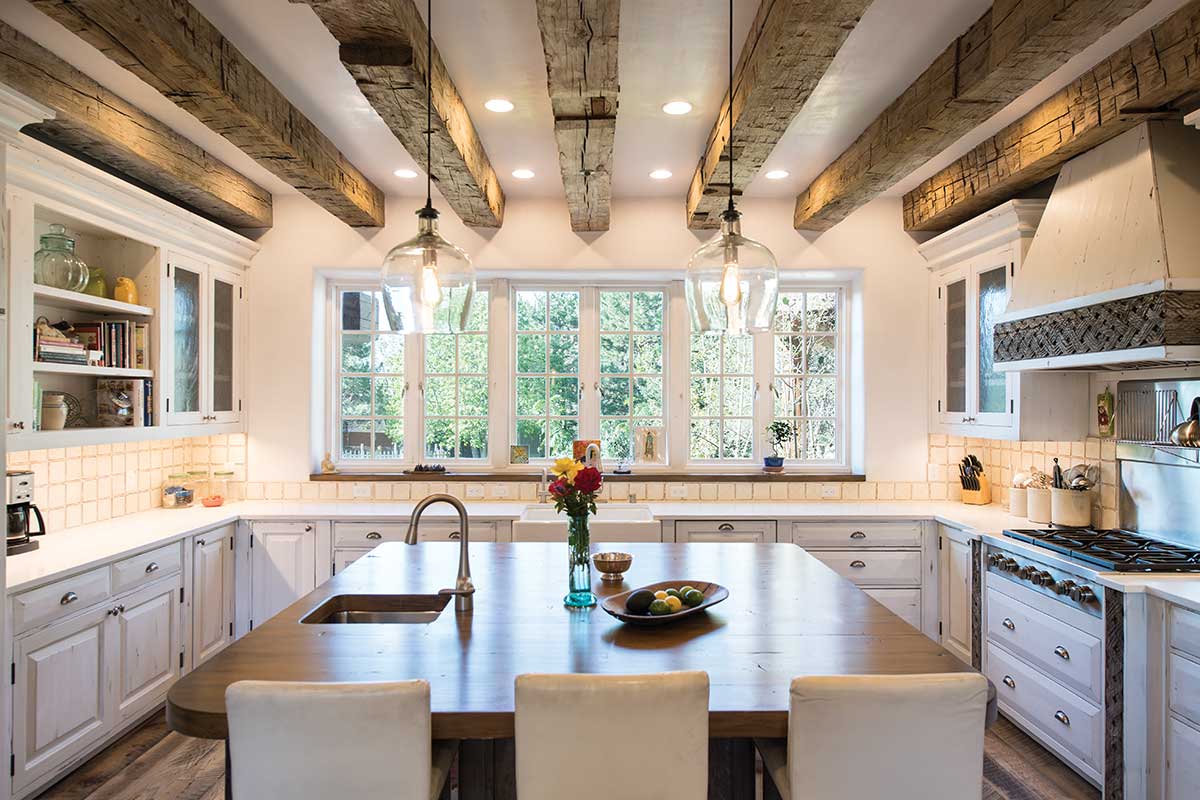 The kitchen was deliberately moved so it would overlook the beautiful backyard. The new divided-light windows were a key design element, not only for aesthetics but for function; Melissa loves bringing in fresh air when the weather is fine. 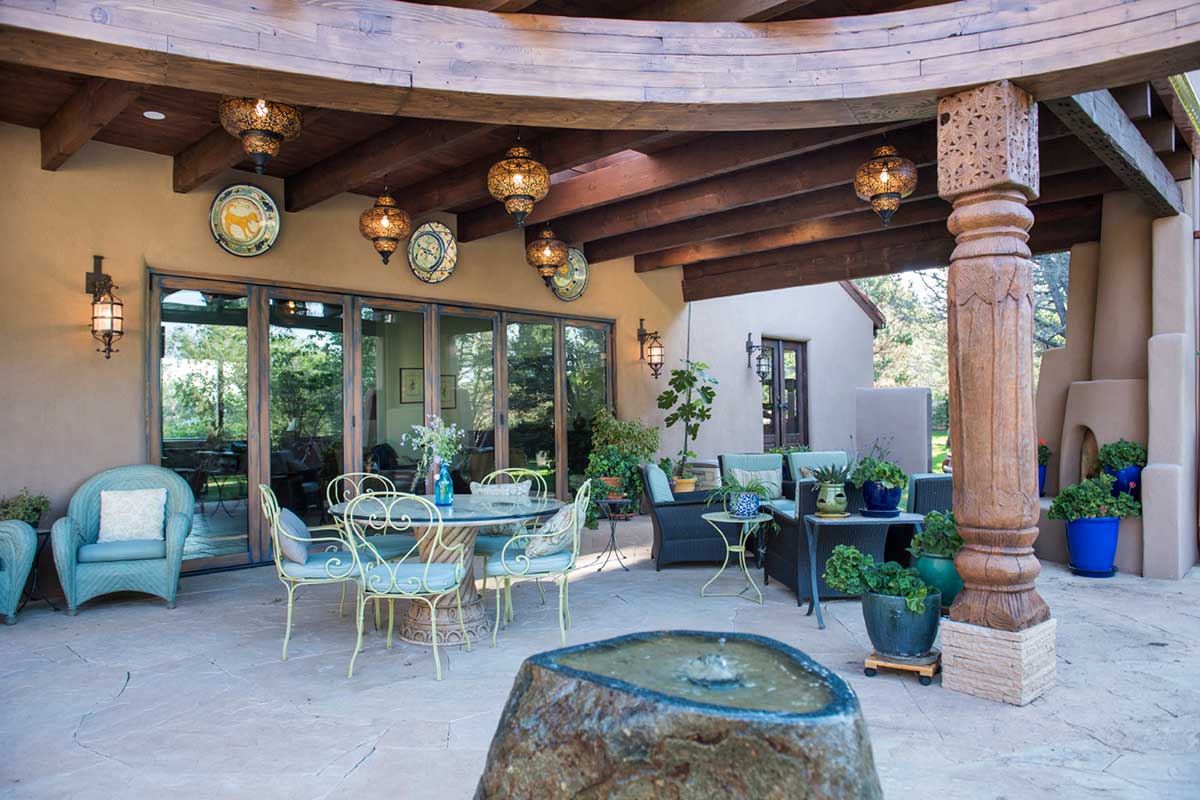 The family lives outside in the summer, so a large, covered, and well-appointed portal was essential. The distinctive curved beam—designed, built, and very carefully set into place by La Puerta Originals—lends an organic feel to the previously angular area. Folding window doors offer seamless indoor-outdoor access and make entertaining a breeze. 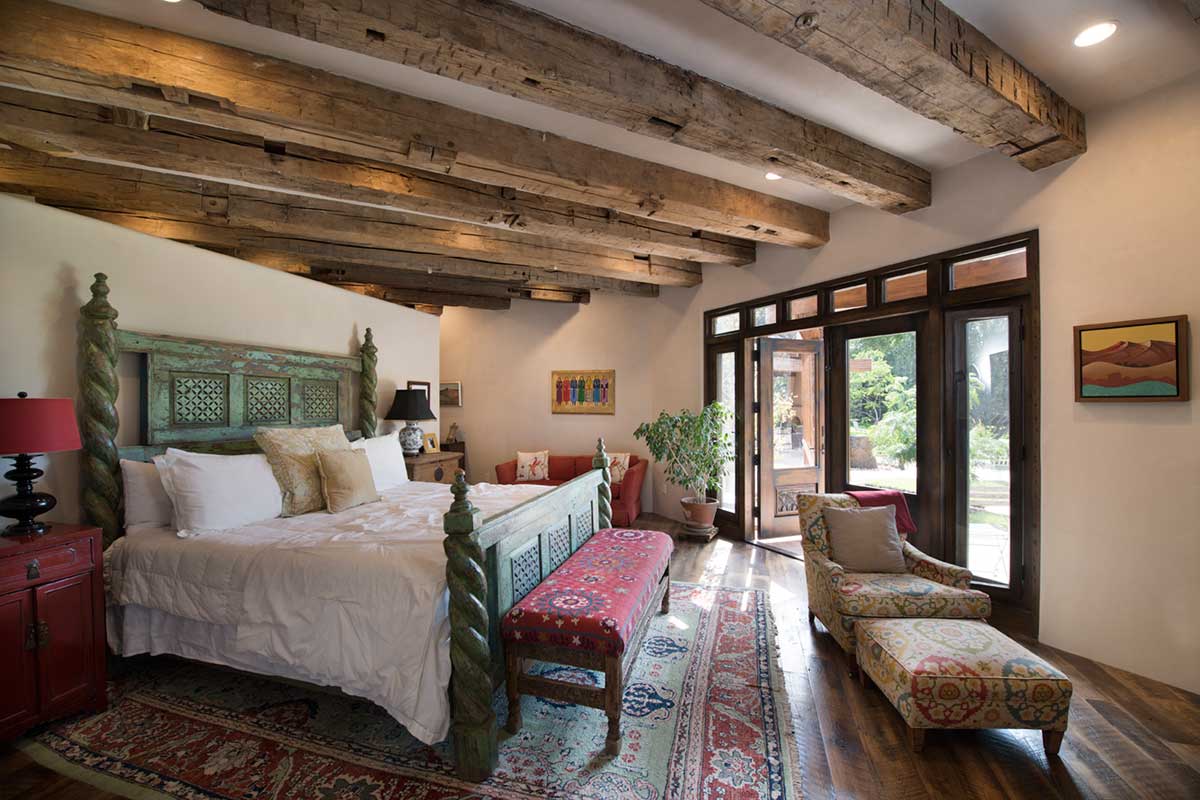 Amazingly, the original house lacked a master suite. An addition rectified this omission, and the new master bedroom is cozy and colorful. A hand-crafted and carved La Puerta bedframe anchors the space.

the family that works together, lives together—in a home of their own creation

You might assume that a couple who has not only been married for 18 years but works together every day—designing custom doors, cabinetry, and decorative woodworks for discerning homeowners all over the world—would have a very clear, joint picture of their own home’s renovation. Not exactly.

Scott Coleman, creative director of La Puerta Originals, is, by all accounts, an admirable husband and father, and a design genius. He is not, as it turns out, a mind reader.

He’s the creative; she’s the planner, to the degree that when Melissa finally was able to get Scott to start putting pen to paper for their personal project, she had long since decided on the arrangement of rooms, interior finishes, and even the outdoor areas. Melissa recalls, “Scott would say, ‘Are you sure you really want to do that?’ And I was like, arghh, the time for decision-making is over!”

The Colemans purchased their home, an older one-story near Museum Hill in Santa Fe, in late 2015, after seeing about 50 houses that were available at the time. They were drawn to the one-acre property with its expansive backyard, gardens, and apple trees. The house itself was relentlessly rectangular, dark and low-ceilinged, and although it was missing a few key elements—notably a master bedroom and bath, a laundry room, and closet space—it possessed the proverbial “good bones” every potential remodeler looks for.

After interviewing several contractors, Scott and Melissa hired Joel Muller of Tent Rock, Inc., winner of a 2009 Heritage Preservation Award. Muller’s knowledge of historic renovation practices would come in handy during the renovation of the Colemans’ 1940s-built house, though often to the owners’ dismay.

“When you renovate an old house, there’s always something you’re going to find,” says Melissa. “Things like that start adding up, and we had a budget.” Tent Rock removed and replaced the floor joists due to sagging and mold. The roofline was sagging. All of the plumbing and electrical was redone. “We probably could have, and should have, built a brand new house; just pushed it over,” says Scott.

The family—Scott, Melissa, teenagers Chance and Story, and a passel of pets—initially tried living in their home during the renovation, then in an Airstream in the backyard, and finally in a rented townhouse in downtown Santa Fe, but timing forced an earlier than expected return to the house while it was still being worked on. With no kitchen, no appliances, no electrical, and no lights, their existence, at least for a few months, was little more civilized than glamping, but as the interiors began to take real shape, the family took heart in the knowledge that the painful part would soon be over. D Maahs Construction came in at the end to wrap up a few items, and in April 2018 a collective sigh of relief was heaved by all; the project was finished. And it was magnificent.

Fond memories of the entire family cooking together in Scott’s parents’ kitchen drove the design of this one.

Melissa finally had her dream kitchen, relocated from the front of the house to the side facing the backyard, where the views through new divided light windows are glorious. With creamy, “shabby chic” white cabinetry, ample cook and work space, a pantry (finally!), and a smattering of antique wood accents—a few of Melissa’s favorite pieces from the Nuristani region of northern Pakistan—the kitchen is well-appointed, cozy, and comfortable. Its similarity in design and feel to the kitchen Scott designed for his late parents is no accident; fond memories of the entire family cooking together in Ken and Ruthe’s house drove the design of this space.

“The whole feeling of their kitchen was just so wonderful,” says Melissa. “The only thing that was missing was a place for us all to sit at the bar. We sit at our bar all the time; rarely at the dining table.”

All of the walls are now a simple white diamond plaster and serve as gallery space for the Colemans’ impressive collection of mostly Native American art. Melissa is involved with the Institute of American Indian Arts, and prior to that, she was associated with the National Museum of the American Indian; her collection dates back 25 years and includes pieces by Stan Natchez (Shoshone/Paiute), Darren Vigil Gray (Jicarilla Apache/Kiowa Apache), and others.

“In the end, it’s both of our personalities. It’s got his brilliant design, and it has my practicality.”—Melissa Coleman

The cramped, catch-all space that previously served vicariously as Melissa and Scott’s bedroom, closet space, kids’ hangout, and office is now gone—or rather, redesigned and repurposed as a spiffy laundry room and office. There is now a true master suite thanks to the addition built on the west side of the house, angled slightly to break up the house’s rectangle shape and to capture better views of the gardens and backyard.

And oh, that backyard.

“We live outside in the summer, and for us not having a place where we could be outside was just killing us,” Melissa explains. “Now we’re out there all the time in the summer.” A massive landscaping project courtesy of Clemens & Associates was part of the renovation, including seeding the expansive yard with grass. A rounded, organically shaped portal was built off the den and sunroom, with an incredible, custom-built curved beam—designed by Scott and built by La Puerta Originals, naturally.

“It came in on this giant flatbed, then they hoisted it up on a New Mexico blue sky day and sat it into place,” Melissa remembers. “There’s nothing holding it there; it’s so heavy and massive that they just built the roof right on top of it.” Sliding window doors open wide to facilitate a seamless indoor-outdoor transition, and the big portal is comfortably appointed with a fireplace, beautiful Moorish lanterns, a water feature, and plenty of seating.

Melissa is thrilled with her newly renovated home, which she says is the perfect size for her family. That La Puerta Originals did most of the work on the house is a source of pride for both Melissa and Scott, who claims that what he likes best about the house is that he was able to make Melissa’s wishes come true.

“In the end, it’s both of our personalities,” Melissa demurs. “It’s got his brilliant design, and it has my practicality.” It is certainly another successful project for La Puerta Originals, and given the discerning clients involved, may be the most important one in the entire history of the company.