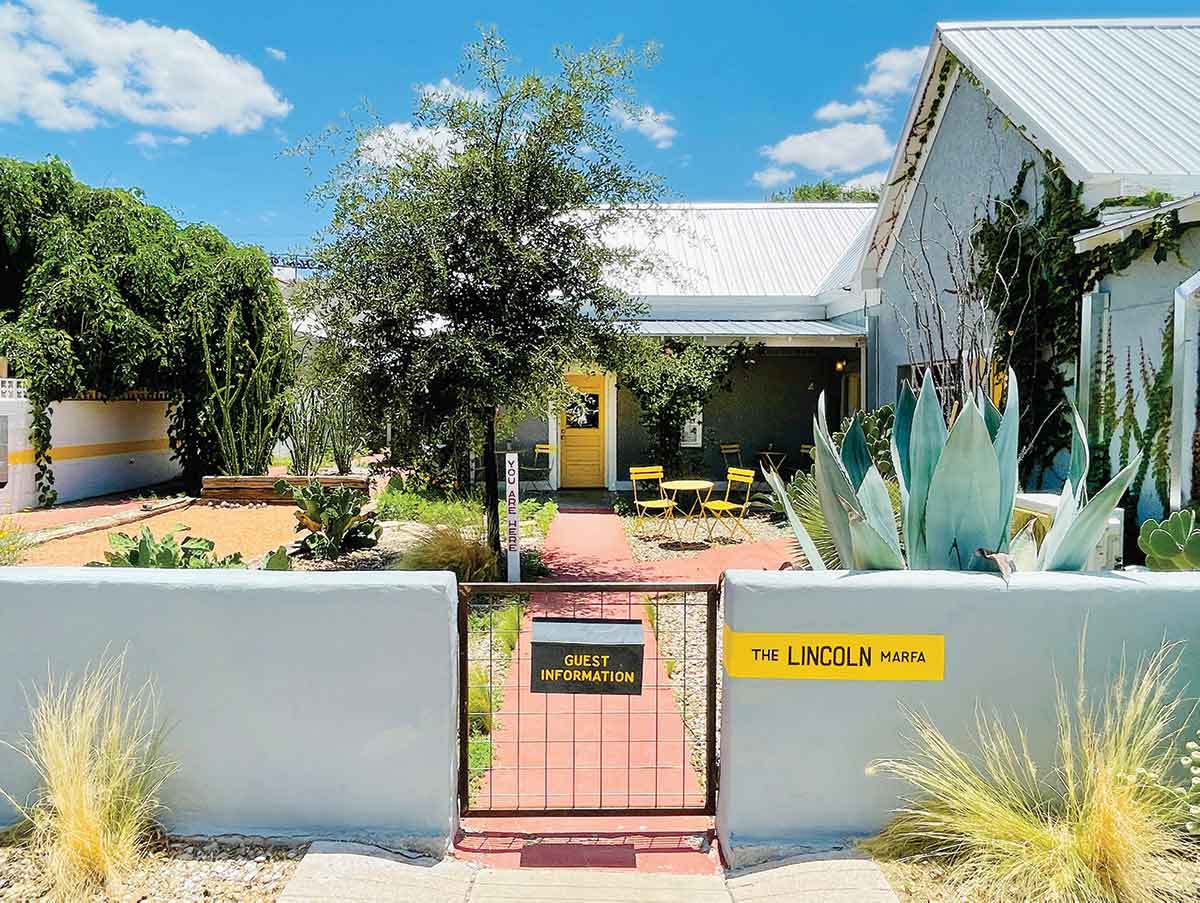 Enjoy your stay at The Lincoln Marfa for a relaxing home base for your cultural adventures. 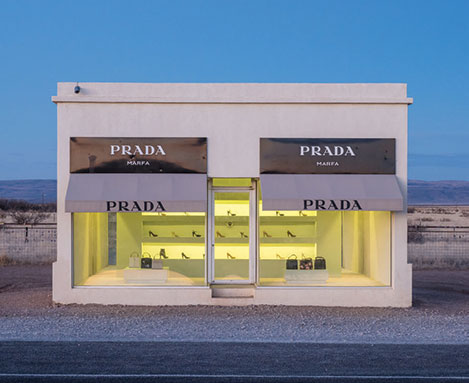 Prada Marfa is an art installation that draws crowds to this culturally sophisticated, yet tiny, West Texas town. 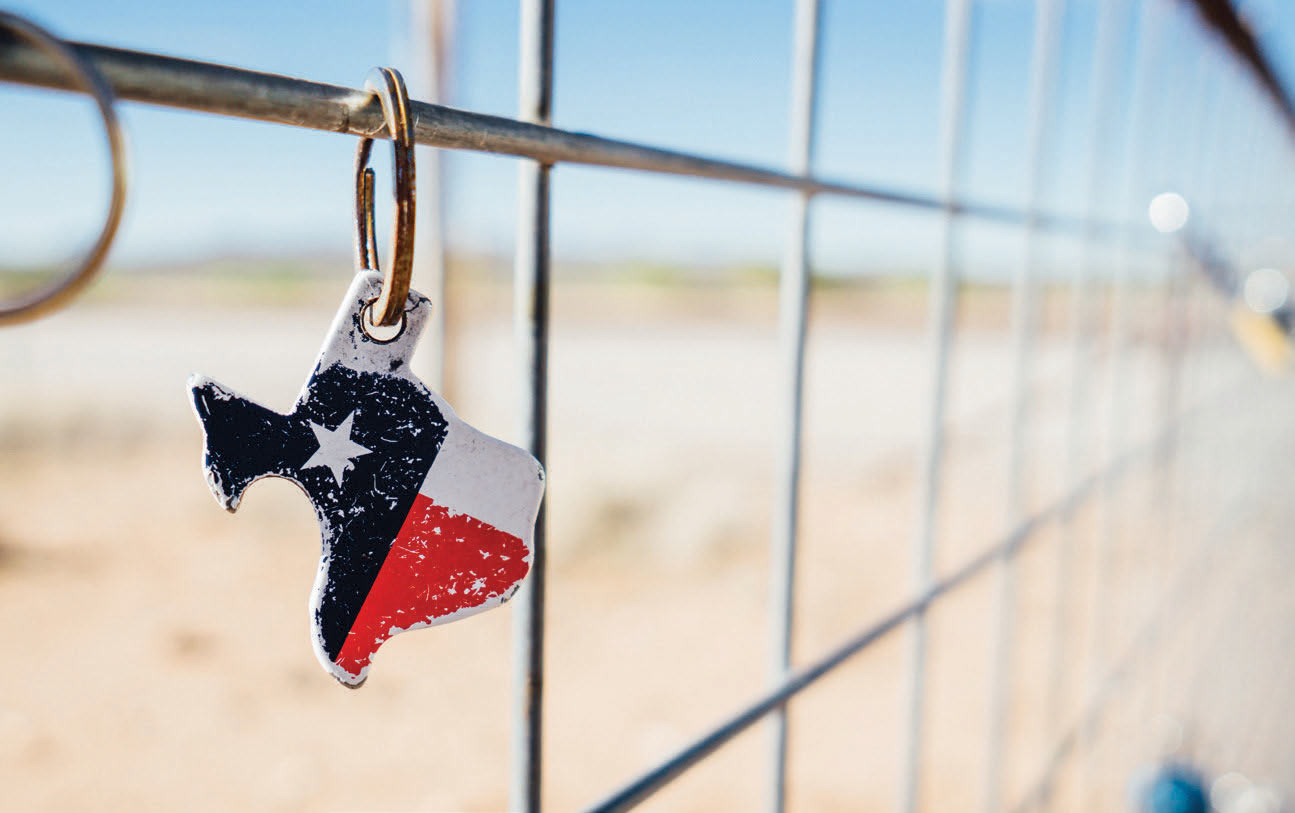 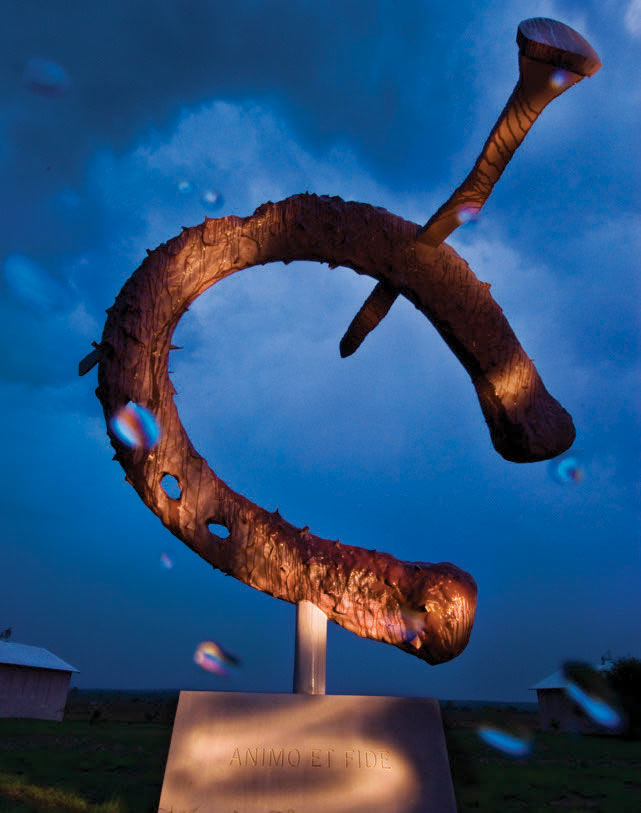 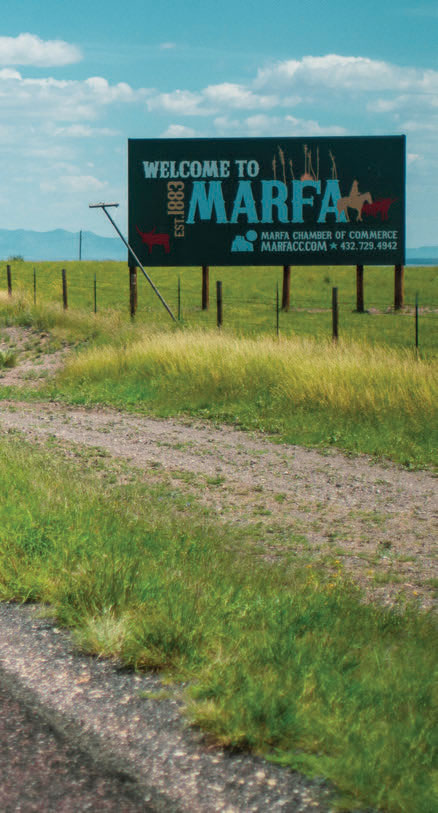 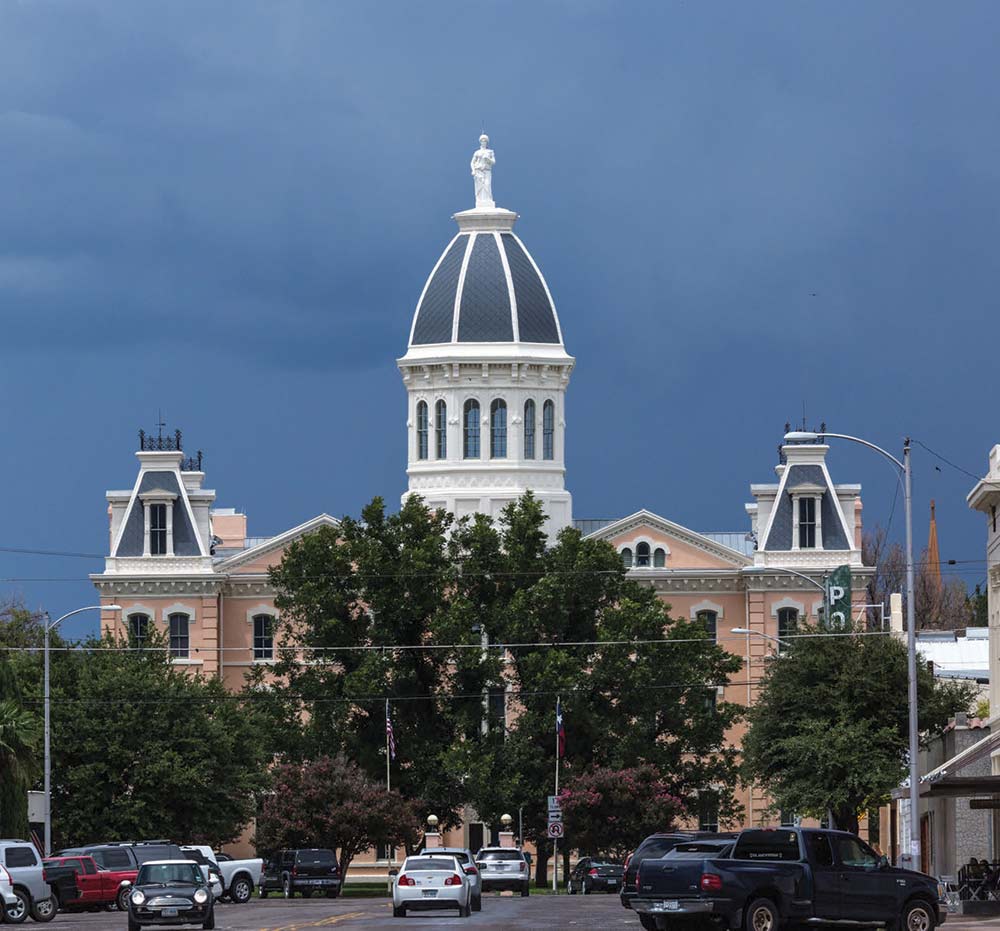 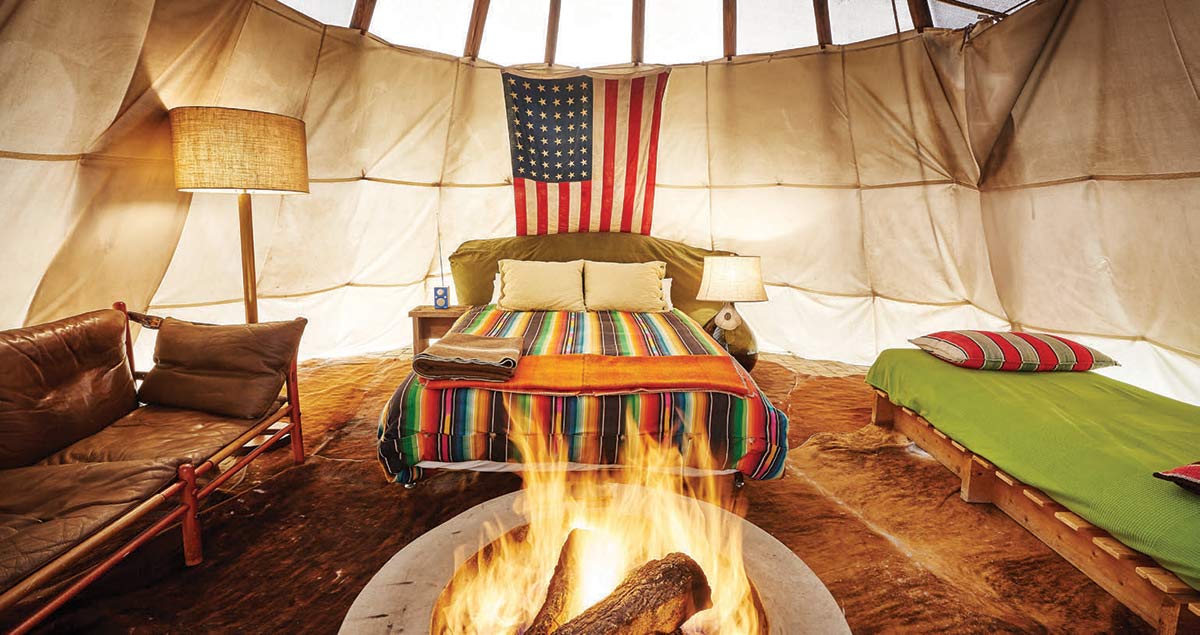 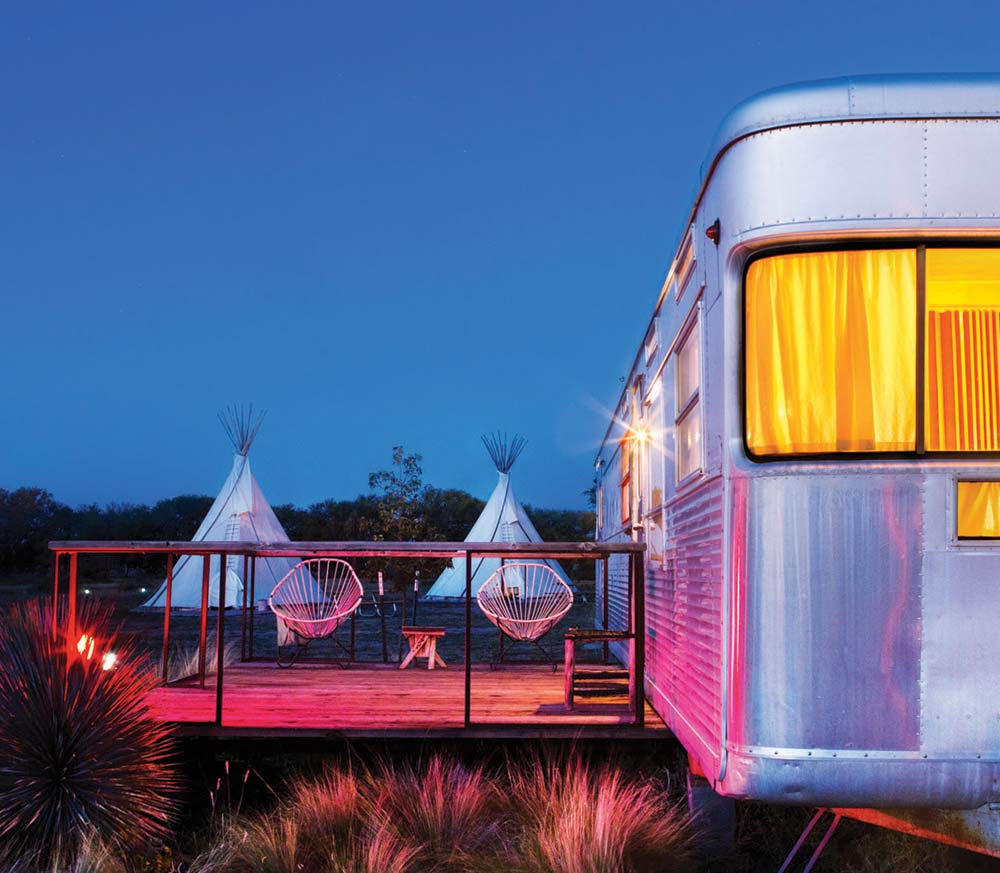 When you make El Cosmico your home base, you can choose to stay in a tent, tepee, retro camper and other eclectic accommodations. Even if you don’t stay there, do stop by and check out the fun gift shop.

Driving in, the darker-than-black highway cuts through a sea of goldenrod grasses dried by the searing sun and whipped to and fro by prairie winds. At just under a seven-hour drive from Albuquerque, Marfa, Texas, is a long weekend hot spot you don’t want to miss. Founded in the 1880s as a railroad water stop, later the Marfa Army Airfield was a training field for several thousand pilots during World War II and a training ground for many U.S. Army’s chemical mortar battalions. Its military history and the relics left behind play a significant role in its art and architecture today. Although it has a population of less than 2,000 people, its’ a beacon of arts and culture.

Along U.S. Highway 90, you’ll catch your first glimpse of the unusual and artistic bent that makes this place special. While technically closer to the town Valentine, Prada Marfa pops up on the horizon seemingly out of nowhere.

Artists Michael Elmgreen and Ingar Dragset, whose work is known to explore the relationship between art, architecture and design, collaborated with Prada to create this mirage. This permanent mini-Prada store is never open, but it’s nonetheless punctuated with actual Prada shoes and handbags. This is just your prep for the art-filled weekend to come.

So Much Art
Marfa is home to a host of other arts venues and topping the list is the Chinati Foundation, a contemporary art museum in Marfa. The museum is based upon the ideas of its founder Donald Judd, one of the most significant artists of the twentieth century. You’ll find a collection of contemporary artists’ work in three locations, each of which are repurposed structures and sites connected to Marfa’s history including a former wool and mohair warehouse, a former military hospital and artillery sheds.

Marfa is no one-trick pony, so the Chinati Foundation is not the only place to immerse yourself in culture. Be sure to wander through the nearly two dozen other galleries and museums peppering the Presidio County seat. Make a stop at the Blackwell School, where until 1965 Mexican American children in Marfa were subjected to de facto segregation. Today, this Historic Landmark celebrates the rich Hispanic culture and history of Marfa.

More to See and Do
Marfa is known for its festivals and events. October is host to the Marfa 100 charity bicycle race as well as Chinati Weekend. November hosts MXTX-A Cross-Border Exchange, which brings 40 artists from across Texas and Mexico to collaborate on a sound library culminating in a live performance.

Although it will be over by press time, plan for next September’s Trans-Pecos Festival of Music + Love. Local venue El Cosmico is home to four days of live music, sandlot baseball, workshops, vendors and more. The lineup of talent is always spectacular.

If you’re in town on a crystal-clear night, head east on U.S. Highway 90 for about nine miles until you reach a widened shoulder, the official viewing area for the Marfa Lights. Originally spotted in 1883 by a ranch hand, several theories abound these strange lights described as “mysterious orbs” in yellow-orange and also green, blue or red, sometimes remaining stationary and sometimes darting across the dark desert landscape. Spot them, and you can decide for yourself: UFO, ghosts, car lights?

Sleep and Eat
In addition to hosting events, El Cosmico is possibly one of the most fun spots to hang your hat for the evening. You can stay in a funky, retro camping trailer, a tepee, a yurt, a safari tent or pitch your own tent. On the compound, you’ll find a souvenir shop with carefully curated books, clothing and more.

If you’re looking for a more traditional stay, head to 105 Lincoln. And by “traditional,” we only mean not a tepee or a yurt. This eleven-suite property was once a 1920s horse stable and has been restored to preserve the history of the building and the eclectic spirit of the community. Each suite is different and one—an addition to the original building—served as a bomb shelter in the ’50s. Each unit is a little bit Southwestern, a little bit modern and all Marfa-chic.

With names like Buns N’ Roses, Do Your Thing and Food Shark, you can imagine there’s a bevy of interesting eats to refuel after your arts escapades. Give Para Llevar a shot for a hearty wood-fired pizza or burger and check out their bodega for snacks and local goodies. For a more refined—yet still super rustic—sit-down meal, head to Al Campo Wine Garden & Rustic Bistro. Outdoor dining at wooden picnic tables has never been so fine as when you’re doing it with charcuterie and wine! They’ve also got fun favorites such as chips and queso, tacos and more.

All in all, a long weekend trip to Marfa will just leave you wanting more—we didn’t even touch on the activities such as gliding, golfing, yoga and shopping. What’s that you say? You’re already planning your second trip? Go south!