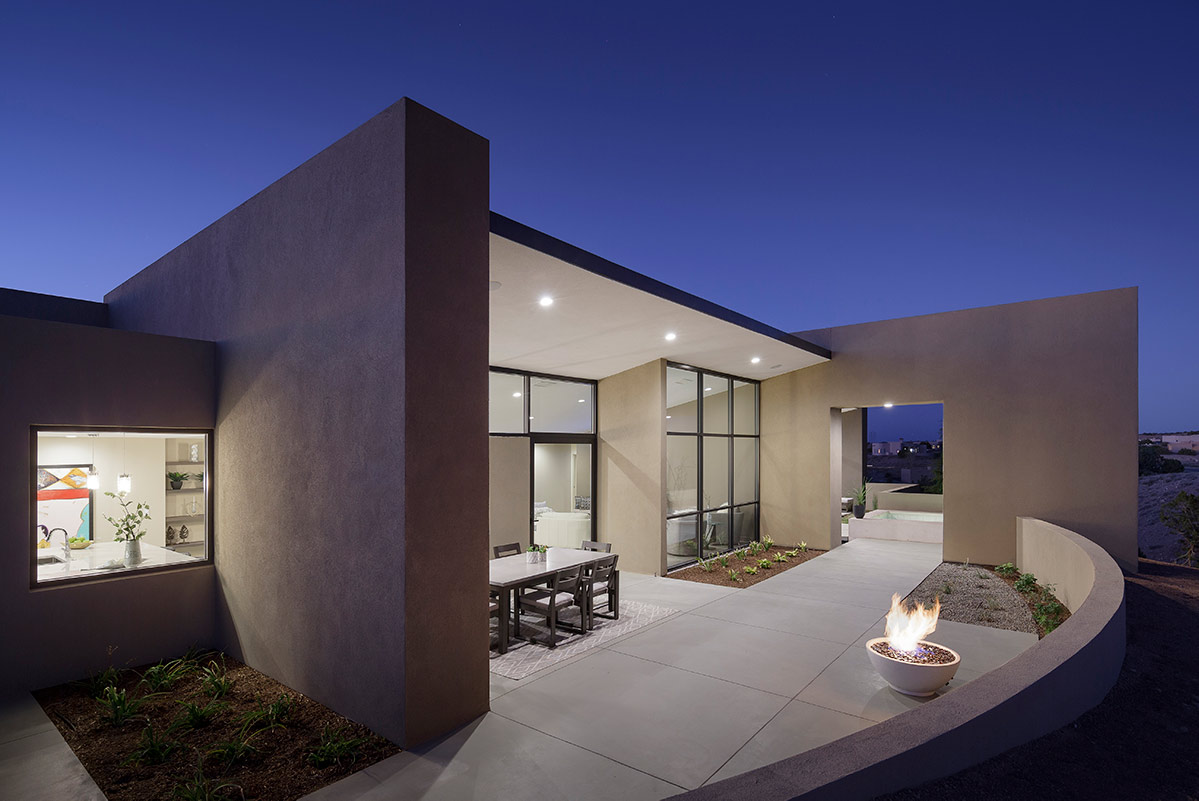 Endeavoring to live in Placitas, these homeowners never imagined themselves in a modern home—until they fell in love with the architecture of this one. 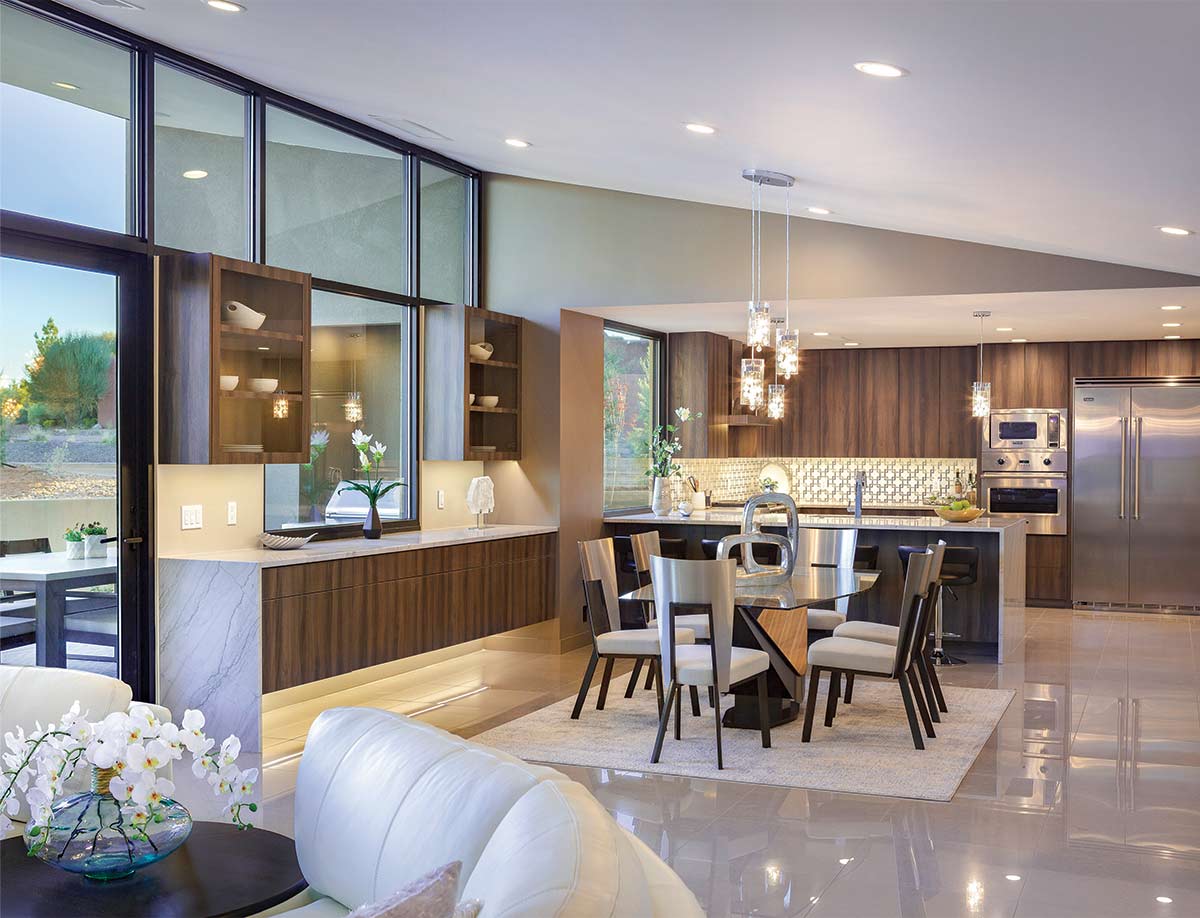 The ceiling line sweeping up and out makes way for larger windows allowing in loads of natural light, while the buttress walls are designed to block the direct sunlight which would be overwhelming. 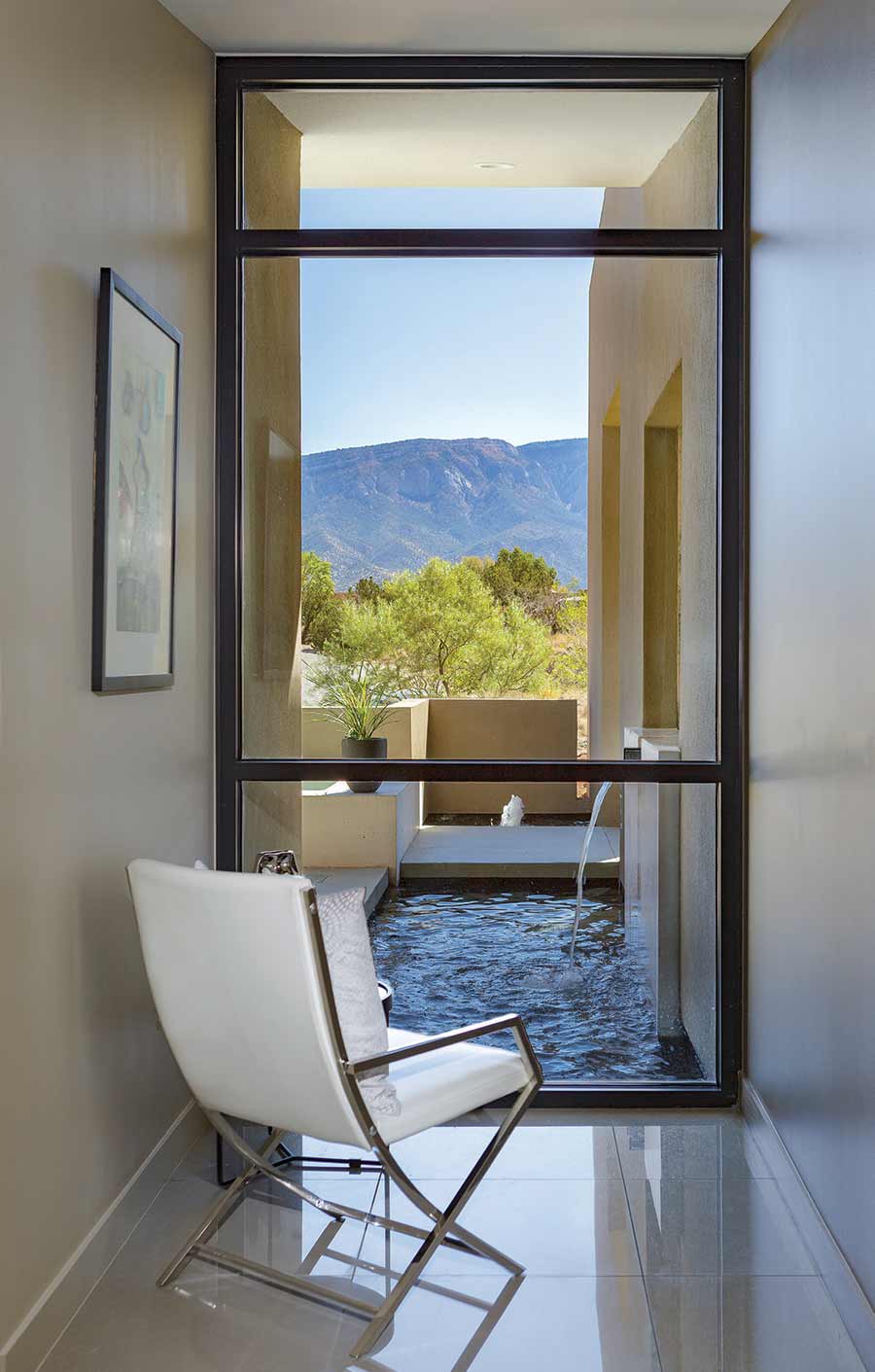 Paul Kenderdine takes design cues from the late architectural genius, Frank Lloyd Wright when it comes to a sense of discovery throughout the home. 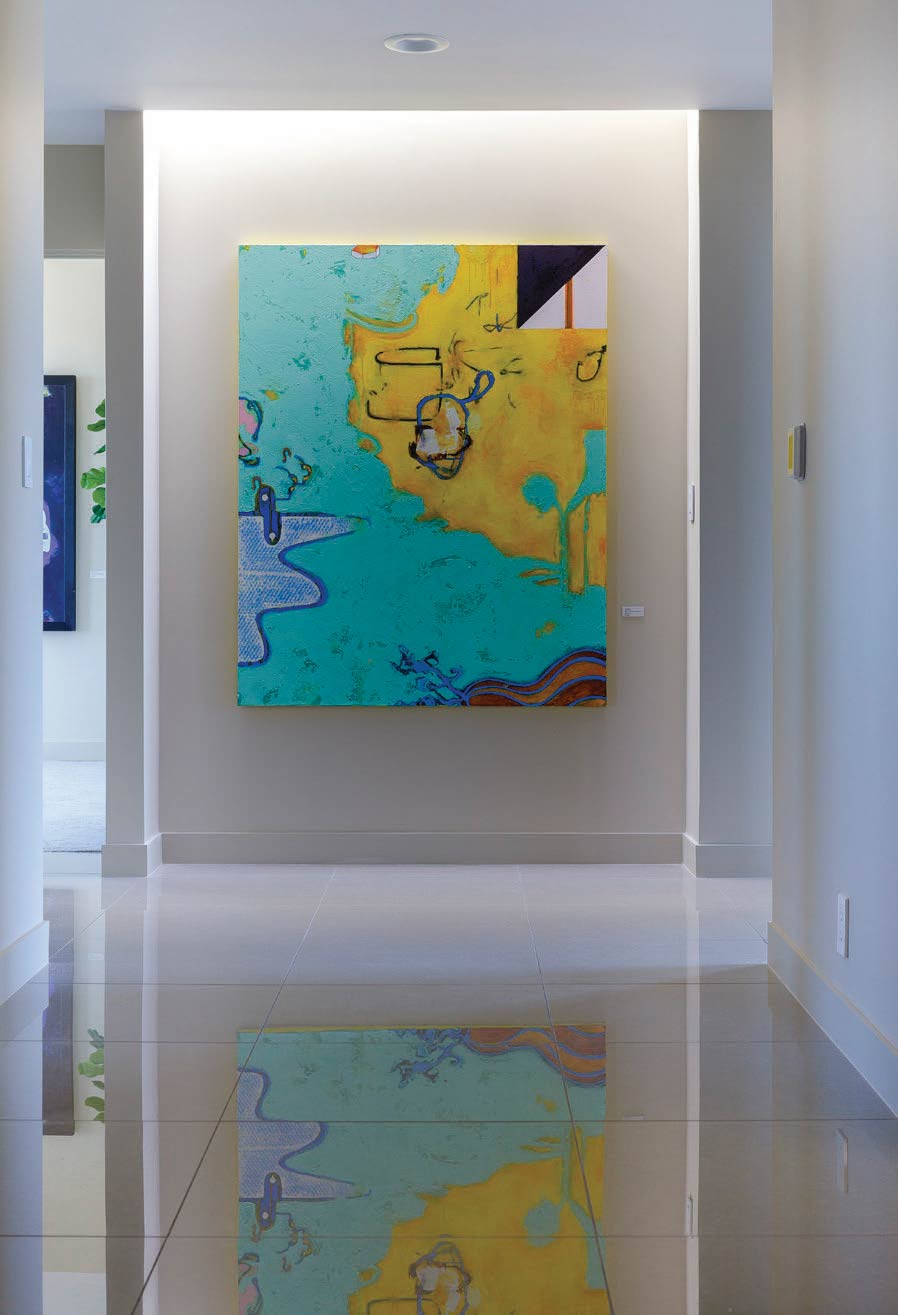 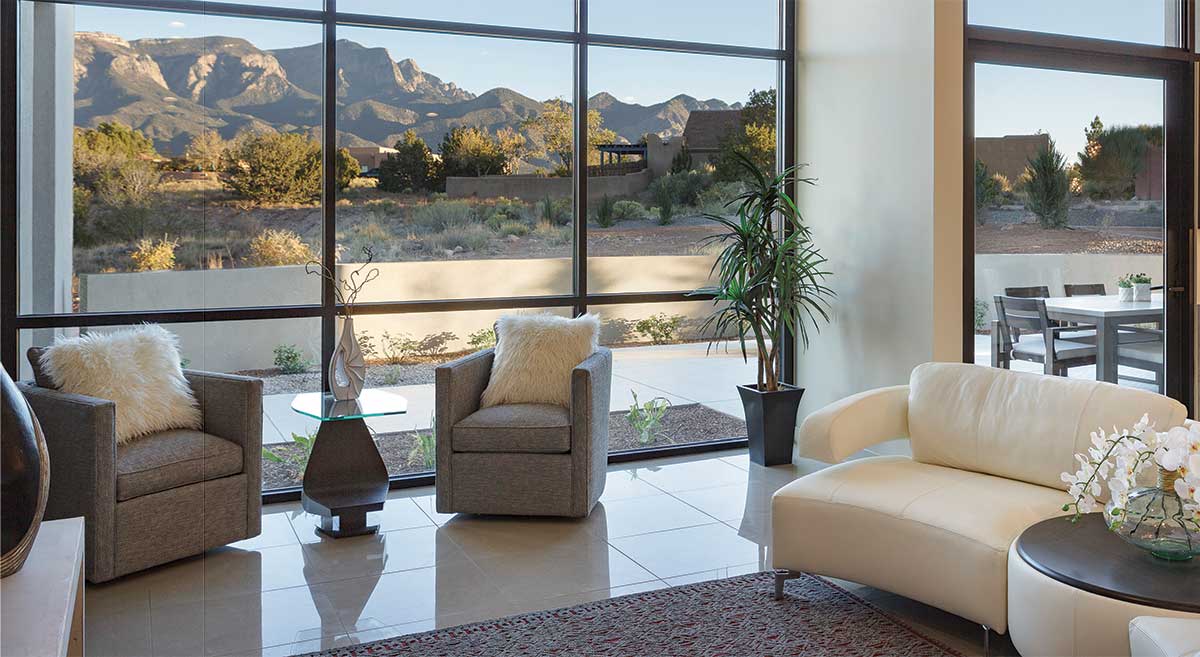 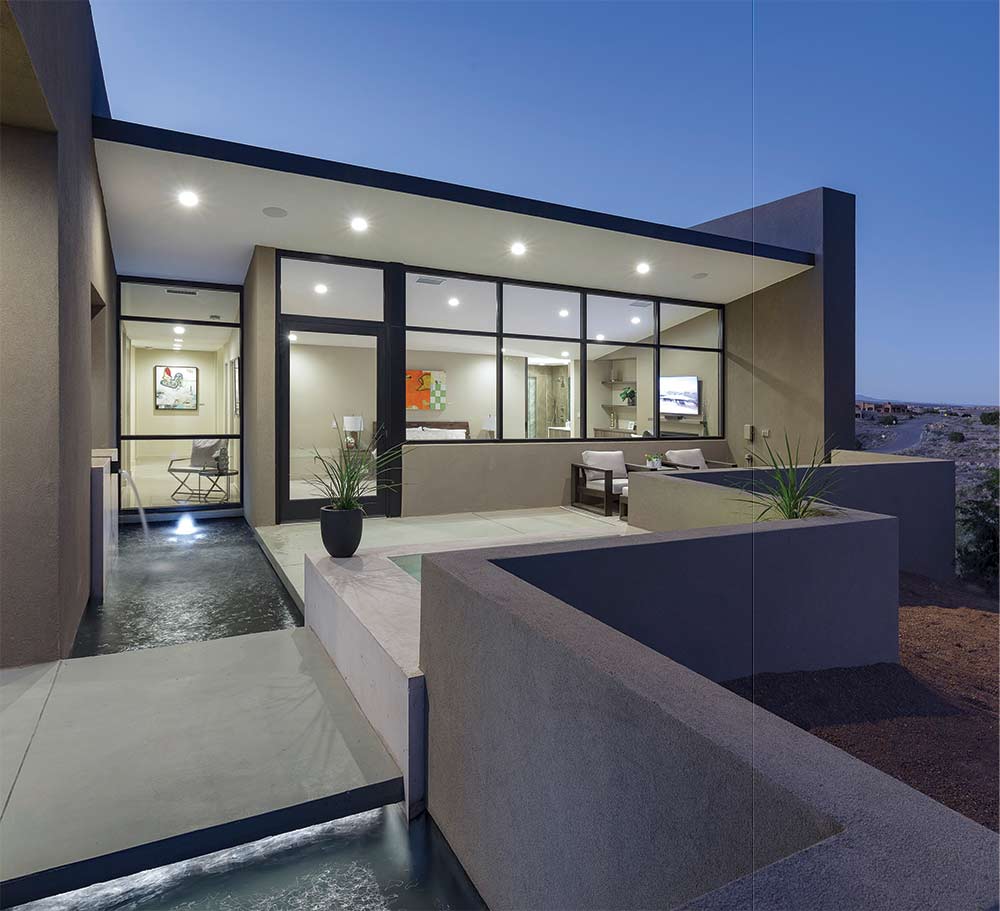 Floating concrete walkways over water are just one example of the ways in which Paul Kenderdine added creative elements to the home’s design. 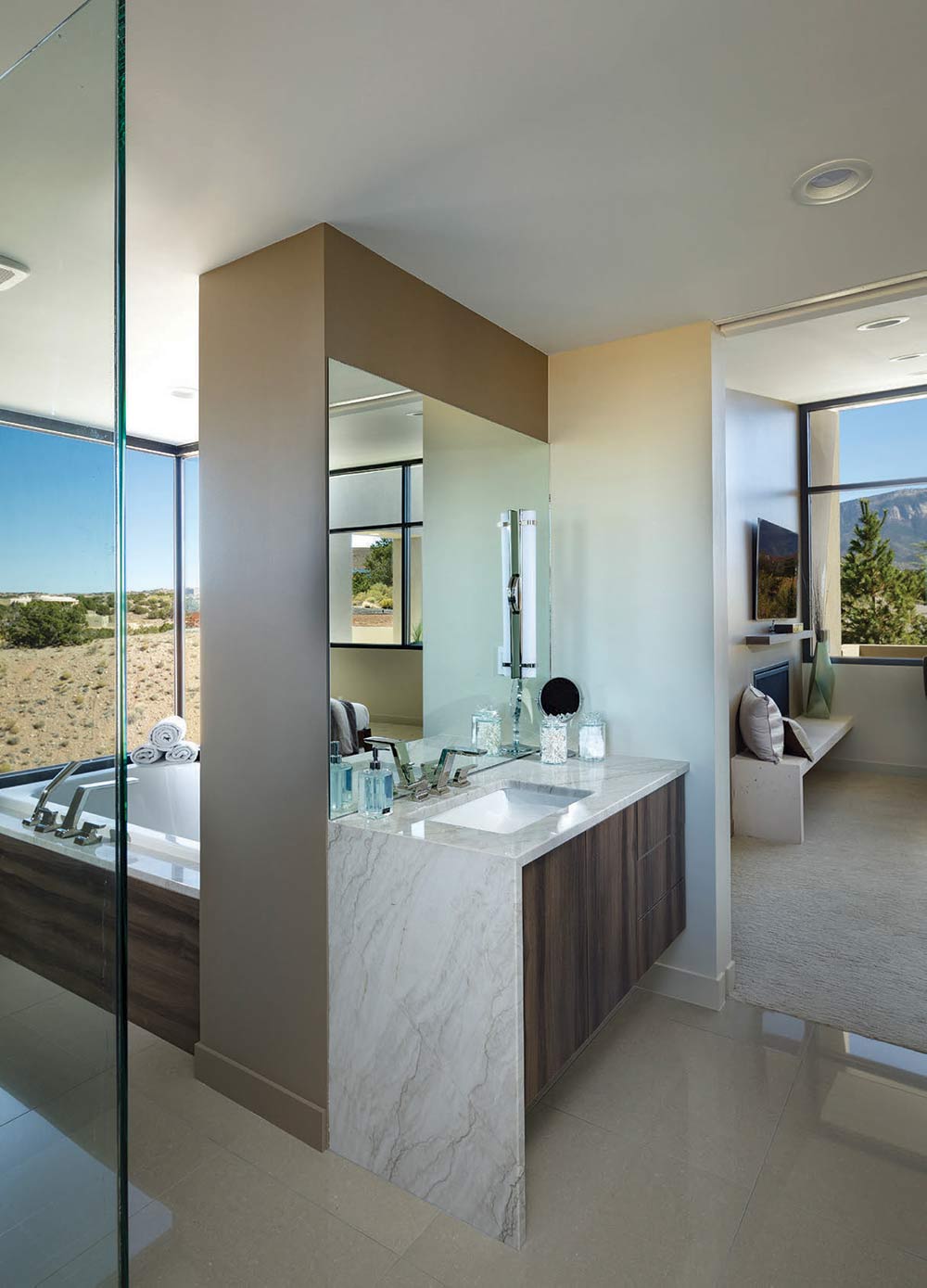 The primary bathroom is an example of creative use of space with the tub situated behind the vanity but with views surrounding it. 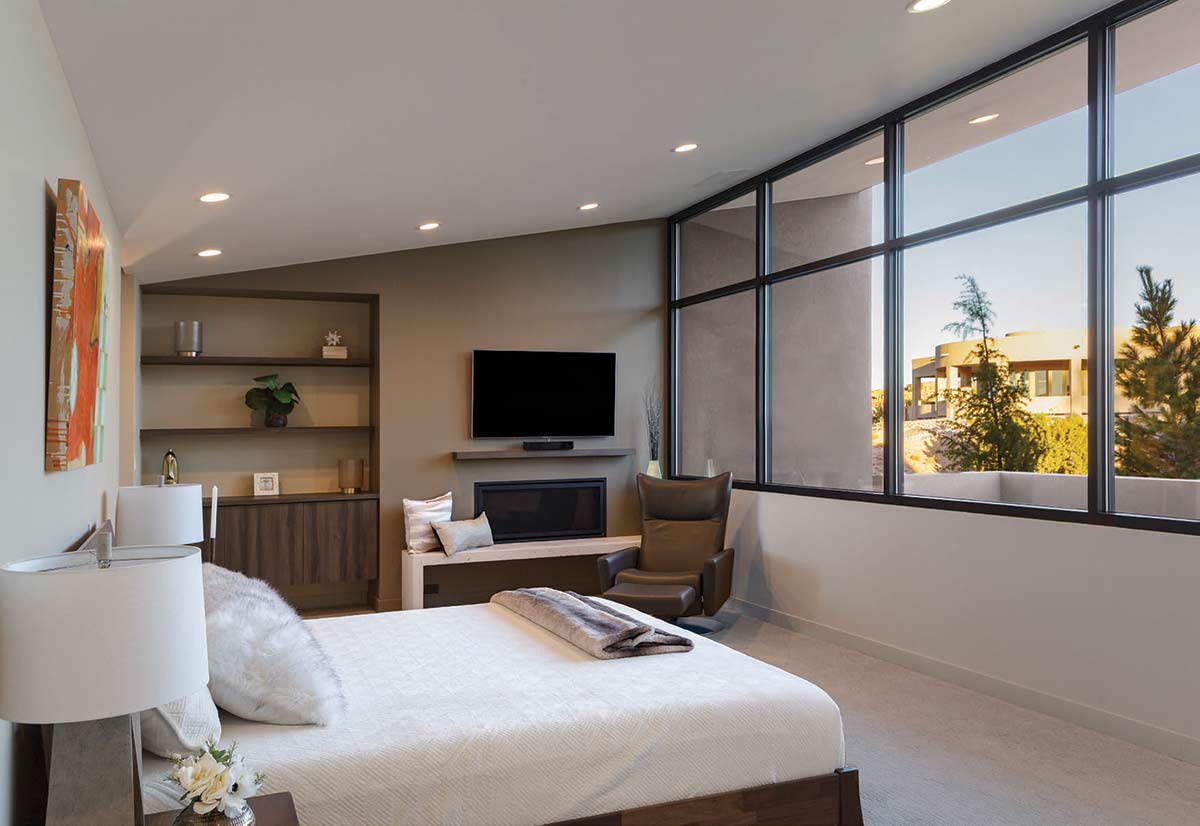 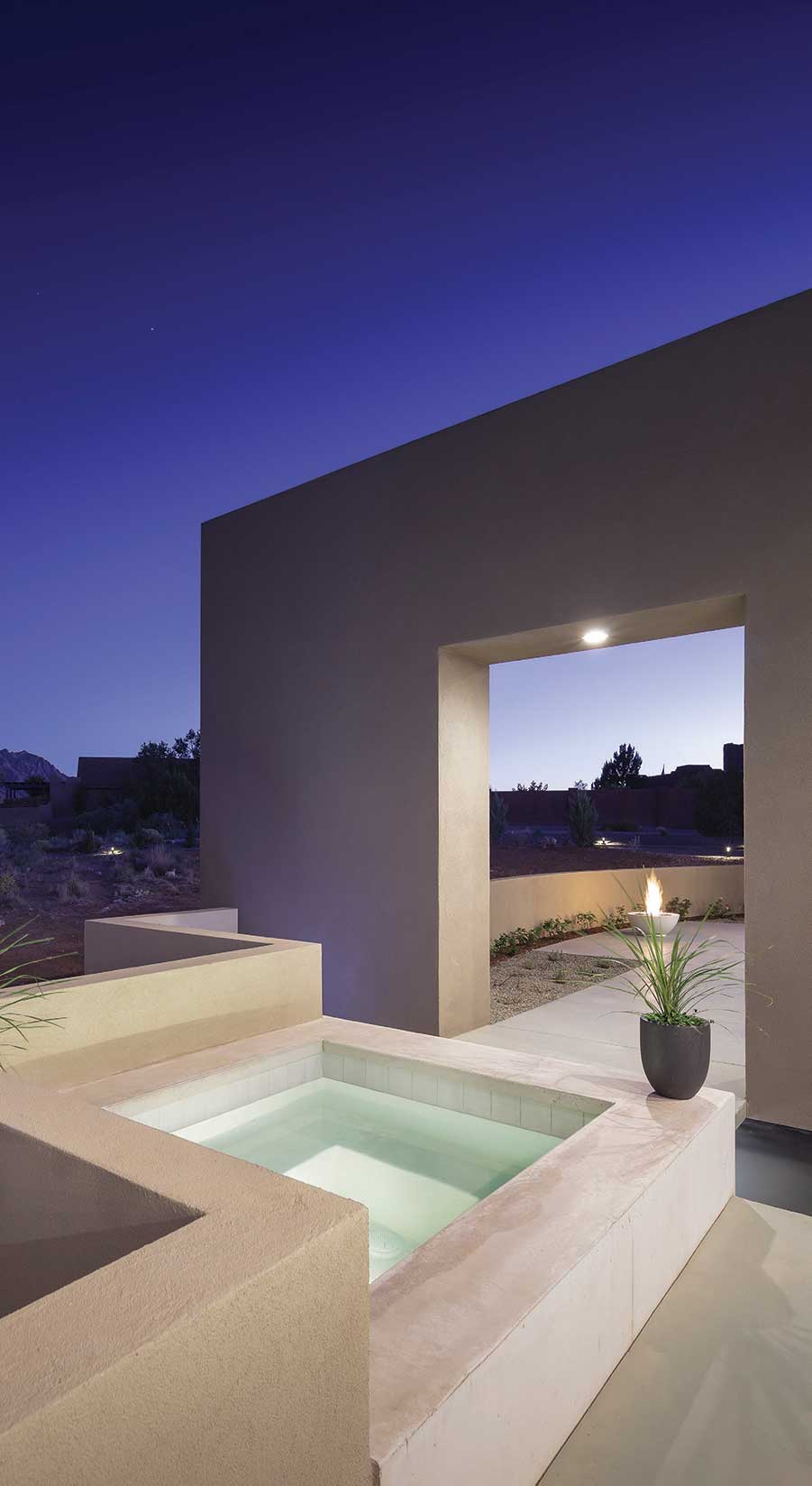 For years, Deb and Tom Hammond-Doel felt a pull to retire in Placitas, New Mexico. For twenty-five years, the pair made an annual trek to participate in the Albuquerque International Balloon Fiesta, relishing their Land of Enchantment visits. Deb grew up in New Mexico while Tom hails from Washington state. When Tom retired from a high-tech marketing business, the couple moved from Washington to Denver, then to Santa Fe— always with their sights on Placitas.

Fond of historic, rustic houses, they’d outfitted themselves with all new furniture for what they thought would be a classic, Santa Fe-style home. But sometimes even the best laid plans don’t stick. While perusing Southwestern-style homes on the market, on a whim, their realtor suggested they see a different style house, still under construction.

It was a speculation home by Paul Kenderdine of PWKI Design Build. Kenderdine has more than 30 years of design and building experience, with an array of award-winning homes to his name. This 3300-square-foot, three-bedroom Placitas house was decidedly modern, with bold geometry, big windows and a striking roofline. Nothing Southwestern about it.

Paul and his wife Brenda originally designed the home for themselves, for a different site. But when Paul walked this one-acre Placitas lot, he felt the floor plan would work for a spec home. He and Brenda executed the entire design, their first enterprise as a team, with Brenda selecting all the finishes.

Drywalling was underway, making it difficult to show the intended final product, but it was enough to hook the Hammond-Doels. “The minute we walked in this house we fell absolutely in love and weren’t going to live anywhere else,” says Deb.

How does an unfinished home inspire such an about-face in personal aesthetics? It started with a conversation about the Kenderdines’ vision.

There is a compound angle, in the ceiling between the kitchen and dining room. It’s unobtrusive but telling. “Six points come together at one spot. While framing, you have to offset all these structures to get by all that math and make sure they come together at the same point,” says Paul. Tom, who studied architecture for six years, was struck by this elegant detail. “There are very few builders that can pull that off with that level of perfection. When Paul started talking about his vision for the house and his inspiration, I think Paul and Tom really connected over architecture,” says Deb.

With a set of Paul’s exquisitely hand-drawn blueprints, the Kenderdines explained their intent. The home radiates from one horizontal line, which intercepts a circle suggested by low, curved garden walls. A series of buttresses lend depth both horizontally and vertically. “The symmetry just blows me away,” says Tom.

Paul appreciates the design philosophy of famed architect Frank Lloyd Wright and incorporates Wright’s discovery experience into every project. This home is no exception. “Everything about the entry of the house and how you navigate into it is to draw you into all these different views. You’re kind of compressed. We like t hat squeeze and release,” says Paul. “You enter into a gallery and then the sloping ceiling juts up int o the view of the mountains.” The sightline amplifies the view while blocking surrounding homes. It’s these details that awed visitors and judges in the Fall 2020 Parade of Homes as well. It won Best Outdoor Space, Best Bath and the Premier Award.

“The symmetry just blows me away.”
– Tom Hammond-Doel

Among the features of the home are walls of commercial windows and oversized doors, a glassed nook overlooking a water feature, and a floor plan completely free of any steps. The gallery hallway and powder room feature Kenderdine’s signature skylights for indirect, natural light. Brenda oversaw the finishes, adding some roundness in Paul’s otherwise linear space. The light fixtures and tile choices add some shapely elements as well as visual texture. “I wanted to add softness and curves,” says Brenda.

Paul also took solar exposure into consideration, with a clever element to prevent an onslaught of morning sun through the massive windows. Of the living room buttress wall, Tom says, “the monument [buttress] blocks the sun until it rises above the roof. He purposely designed it that way. It’s amazing.”

Tom and Deb were ready to buy, but the Kenderdines weren’t ready to sell. As the project was a speculation, all the materials had been chosen and purchased and they hoped to finish it as planned, as a whole product. “On this one, we really wanted to be deliberate and not sell it until the end,” says Paul. But the Hammond-Doels were insistent so the Kenderdines relented.

Then Tom and Deb did something few new-build homeowners ever do; they relinquished any input on the look and finish, from cabinets to tile to paint. They found it very freeing. The Hammond-Doels had never lived in a sleek, modern home. What were they to do with all that Southwestern furniture? They jettisoned it all, bought contemporary-style replacements, and paired down their belongings, so as not to clutter the look.

They were willing to just trust the Kenderdines’ vision. Paul and Brenda offered to make changes if the couple wanted them, but Deb and Tom declined. “We trusted them,” says Tom and Deb added, “If we had changed anything, we would have regretted it because everything came out so amazing.”